Add effects to your tracks 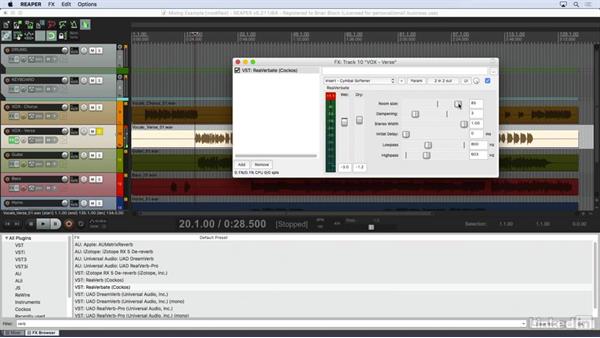 - [Voiceover] Let's take a look at how to add effects…to your tracks and how to modify…and even save your modifications.…In a given project, you might want to add…a little texture to a track…with a special effect like reverb, delay, or chorus.…There are also built in effects for improving…or enhancing sounds like EQ, pitch adjustment,…and compression, just to name a few.…My goal with this video is not to go through…every effect and how to use it,…but to give you an idea of how to add and edit effects…so that you can experiment on your own.…Let's start by looking at the FX browser.…

To add an effect to a track, click the FX button.…It's right here.…Let's do something fun with this vocal track.…Doing that opens up the FX browser.…Mine opened up in its own window.…If you don't see yours, check in the docker.…Just like any other window,…the FX browser can be docked.…If I just right click down here in this space…and click Dock FX browser to docker.…There we go.…Now it's down here.…The effects plug-ins are organized here…

Video: Add effects to your tracks