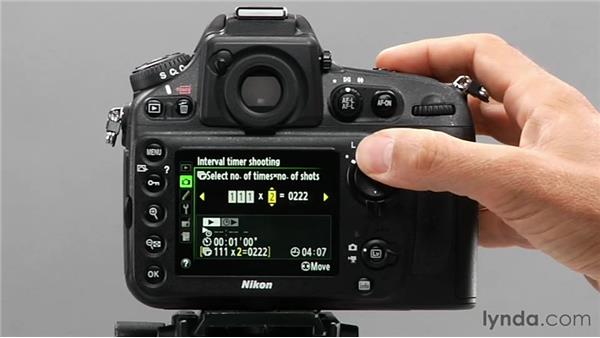 You've probably seen a time-lapse movie like this before. This was created by shooting one frame every so often and then stringing all those frames together into a movie, which shows a tremendous span of time. There are two ways of shooting time-lapse on the D800. The first is an interval timer, which simply tells the camera to fire off every so often, for a certain amount of time. The second mode is the Time Lapse Photography mode, which actually spits a movie directly out of the camera. The advantage of doing time lapse with the interval timer is that it's actually shooting normal still frames exactly to your specs.

So you can choose to shoot in raw, which gives you a lot of extra editing power. You've also got access to each individual frame of the movie. When you drop those into a video editor you've got more options for controlling time within the movie. You might also use the interval timer simply for times when you need to collect some data about a scene over a certain amount of time. Maybe someone's stealing crabapples off your tree and you want to know who, so you set it up to take a picture every hour or something like that and review them later. Finally, when shooting with the interval timer you get full-pixel-count images, which gives you a lot of additional postprocessing options later.

You could crop just a part of a scene out of an image. You've got more resizing options. When you shoot with Time Lapse Photography, you're going to be outputting at standard video sizes. To configure for time-lapse, I go to my menu, and in the Shooting menu I have an option called Interval timer shooting, which of course defaults to off. I'm going to come in here and take a look at this. I've got a range of parameters that I'm going to be scrolling through from left to right up here, and this down here is a status display that's going to show me how things are progressing as I set each of these options.

First, I can choose to start my time-lapse as soon as I'm done configuring, or I can set a time. So this is really nice if you're wanting to do a time-lapse of sunrise. You don't actually have to get up before the sun rises and configure your camera. You can say start this at 5 a.m. or whatever. After I've configured this, I can hit the left or right arrow button here to go to the next parameter, and that is the Interval: How often do I want it to take a picture? By default it's set for 01 second. I can configure this for hours, minutes, or seconds, or some combination thereof.

I would need to make sure that I've turned on Auto Bracketing and configured that before I start my time-lapse. Finally, I get to this page. I'm all set up here. It's saying that it's going to start right away once I start it. It's got a 1-minute interval. It's going to go 111 intervals, shooting 3 shots each time, for a total of 333 shots. Finally, this is simply a clock showing my current time. You want to be sure if you're traveling that you've adjusted your time zone appropriately to be sure that your clock is accurate on your camera, especially if you're using a timer to start the time-lapse.

Since I don't have a timer set right now, I would simply go here and hit the OK button and it would start. There are a few things to check before you start your time-lapse though. First of all, make sure that you are run not in Self-Timer mode or Mirror Up mode; both of those are going to mess up your time-lapse as soon as it tries to trigger the Shutter button. Because my face is not going to be behind the Viewfinder here during the whole process, it's going to be possible for light to get in there and bounce around inside the camera and that might create flare, so I'm going to flip this closed so that closes off my viewfinder to be certain that no light gets in.

Finally, I want to be sure that I've got enough storage, so I need to do a little bit of calculation about whether 333 frames are going to fit on my card. I see up here that I do have enough space remaining. If I was shooting raw, obviously that would go down. Since I've got two card slots, I can put in a second card, and if I've configured for overflow, then I will very easily have enough space. My Release mode does impact interval timer shooting. If I've chosen to shoot multiple frames at each interval, if I go here to the low continuous rate, then they're going to shoot at that speed.

If I go here to the high continuous rate, they will shoot at my high continuous speed. If I'm on single shot, then they're going to go at the speed that is defined in one of my custom functions. If I come down here to the d category and go to d2 CL mode shooting speed, that's my low speed, which is currently set to 2. So if I have to find multiple frames in my interval timer, they're going to shoot at 2 frames per second.

Once I have started a time-lapse, I can go back to the Time Lapse menu item to either pause the time-lapse or stop it, if I need to stop it early, or I can just turn the camera off. Obviously, for best results you're going to want to be locked down on a tripod. If you're going to be shooting through a length of time that's long enough that your lighting is going to change because the sun is coming up or going down, or moving around, then you're going to need to give some thought to your exposure. Do a little research into time-lapse to learn more about what mode you should choose and what you should expect in the way of exposure changes over time.

11/8/2012
In this course, photographer and author Ben Long details the features, controls, and options in the Nikon D800 digital SLR. The course begins with an overview of what a digital SLR is and a tour of the camera's basic components. Ben then discusses the camera's basic operation: changing lenses, navigating the menus, shooting in automatic mode, reviewing and managing photos on the camera's LCD screen, and transferring photos to a computer.