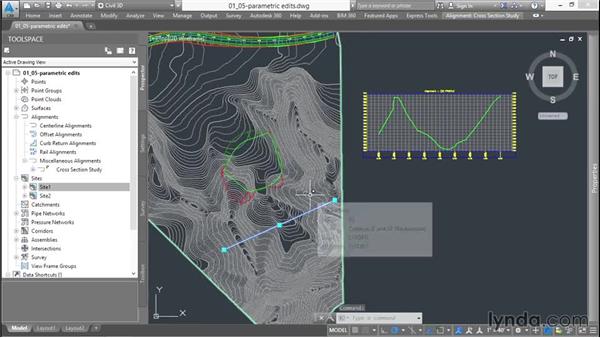 Join Jon Michael Roberts for an in-depth discussion in this video Working with parametric design, part of Learning Civil 3D.

Parametric design is fundamentally what separates Civil 3D from AutoCAD. In this video, I'm going to show you some of the many ways parametric design can radically change how you work. You'll see how parametric design will make your drawings intelligent and allow you to explore iterations, make changes without having to redraw all that is affected by that change, and even perform analysis right on the fly. So in this sample drawing, I've created some grading I'm going to zoom into here.

The grading is this green line that is a feature line. My existing ground is a surface that here is shown in gray. I've labeled it EG for existing ground. And my resultant grading is green for fill and red for cut. So I can go into the site that this grading was done on, which would be Site 1. I go down to the grading group to the first grading group, the one I've labeled Grading Group 1. I'm going to right-click over it and select Properties.

So visually, I can tell I have a large amount of cut that runs up the hill on this side. I can just select the feature line, grab that grip point, and drag it over to follow better the topography lines, and that looks a bit better. So, let's go back and see how that changed things. Right-click over Grading Group 1 again. Select Properties. And it's already recalculated my net volume to now only a fill of 11,000 cubic yards.

Still not where I want it, so let's lower it another ten feet. Right-click again, Raise and Lower, minus ten, and hit Enter. As I imagined would happen, this line here now shows a bit more cut that I would rather not have. So I'll select that feature line. going to hold Shift here to select two different grips at the same time and drag these both over a little. That looks a bit better. So, I'm going to go back, uncheck the properties of my grading group, and now I'm actually at a cut so I'm removing dirt for only 3,600 cubic yards.

This is a drastic change in the amount of earthwork to create this pad. So I zoom out here. Another example I want to show in this particular drawing is a cross-sectional study. So, in this case, I've created an alignment that's actually not a part of Site 1 or Site 2. It's an alignment that is outside of any sites altogether. The reason for this is that I want to study this surface, the existing ground, and nothing else.

Remember that sites are collections of topologies. Well, I don't want to look at anything but my EG surface. So I've created an alignment, a miscellaneous alignment, that is outside of these two sites. The resultant profile shows only the existing ground profile as it runs along this alignment. Now, let's say I only need to look at a smaller sampling of this terrain.

I can now highlight this alignment, grab one of the grips and just drag it visually to where I'd want it to go. Here, the profile automatically adjusts its range and scale. This in AutoCAD would have been an extensive amount of work, not only to create the grid, but to also generate this profile. Lastly, let's look at a corridor. A corridor here is a culmination of the EG, or existing ground surface.

An alignment that's been proposed for the roadway center line horizontally and a vertical profile that's going to design my road. What next happens in a corridor is it takes an assembly, as shown here, and sends it on down the alignment at regular intervals. To better see this, I'm going to rotate this drawing in 3D and zoom in a little. What you can see here is that that same assembly is being repeated on through the corridor at regular intervals and at important intervals, as in beginning and end of curves.

However, if I drill down to my corridor in my Prospector, here I see I have this little exclamation point now added to my roadway. What this tells me in the Prospector is that something in the design of this roadway has changed and this needs to be rebuilt. I can just right-click over the roadway and select Rebuild and watch what happens. You see my roadway changed how it graded out to the existing ground because it now dipped lower.

This is a very easy to then do very various design studies of how a road can run through a surface and see how the resulting grading will fall. Parametric design is an entirely different way of using a CAD platform in civil engineering. No longer are you simply using AutoCAD to generate the graphical depiction of your designs. Civil 3D takes your design process into the computer and allows you to test various iterations, make frequent changes, or simply explore all possibilities in a project while never worrying about the need to redraft previous work. 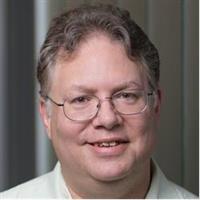 9/29/2014
Great engineering projects begin with Civil 3D. Learn to get up and running with this powerful CAD program in these tutorials, with author Jon Michael Roberts. Discover how important it is to set up Civil 3D properly to streamline drafting tasks, plot styles, and establish design criteria for your particular organization. Jon then shows designers the differences they can expect to see between AutoCAD and Civil 3D, and the different design options Civil 3D offers. The final three chapters are dedicated to grading, laying a driveway, and creating a pipe network to an example single-family home.
Topics include: