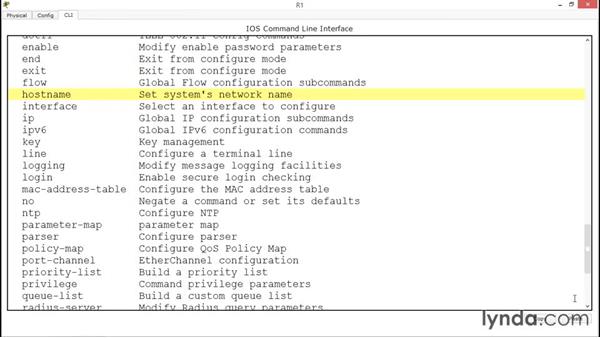 - What I'm going to show you now is how to do the basic configuration command setter at the global config level. That means these commands are configurations that will change or affect the whole entire router. And the first command that is part of the global configuration group, and again, you can see the commands available at this level by going ahead and typing config from the terminal, and I just use the tab key to bring up the full command.

And you can hit the question mark, and these are all of the global configuration commands, so again, these are commands that will change some aspect of the router, but affects the whole router and not some sub-aspect, like an interface or a different line on the router. I can hit, again, the enter key, which takes me down one line at a time. Or as I remind you, you can hit the spacebar, which takes you on full screen at a time.

The command that I'm going to do now is the host name command. The host name command, if you scroll up you'll see it is one of the commands in the command line list at this level. And this command is used to change the name of the router. You can see right now, in front of the parentheses, the router is just simply called Router, and that's not really a best practice. A best practice is to have a unique name that helps you keep track of the router and if you have multiple routers you're configuring at the same time, then you will know which router that you're on at any given point because of the unique name that you have assigned to that device.

Router host names can be up to 63 characters, they have to start and end with a letter, or a number, and they can only contain letters, digits, or a hyphen. The command is simply hostname, space, and then you go ahead and type whatever the name is that you would like to give to your router. In this case, as you might recall, the topology showed this router to be named West, and so we're going to go ahead and just type West.

So after we type hostname West, we hit the enter key and then the name of the router changes to West. You can see the name has changed, it was router, it is now right below, it's showing up as West with config to its right. And that's how you change the name of a router. 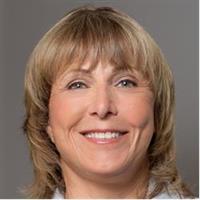 5/11/2015
Learn how to configure a Cisco router to transmit data between local area networks and connect to the Internet. In this course with Denise Allen-Hoyt you'll find out how to configure a Cisco router via the command-line interface using an out-of-band connection. She'll explain how to access the router's three modes—user EXEC, privileged EXEC, and global configuration—and use commands to configure essential settings. In the final chapter, she'll demonstrate how to verify and save your configuration so when the router is shut down or reloaded the settings are maintained.
Topics include:

Q: What version of Packet Tracer was used in this course?

A: Cisco Packet Tracer 6.2 was used in this course.

Network Administration IT and Hardware IT Cisco Routers Cisco