Adjusting the horizon on the bluff shot 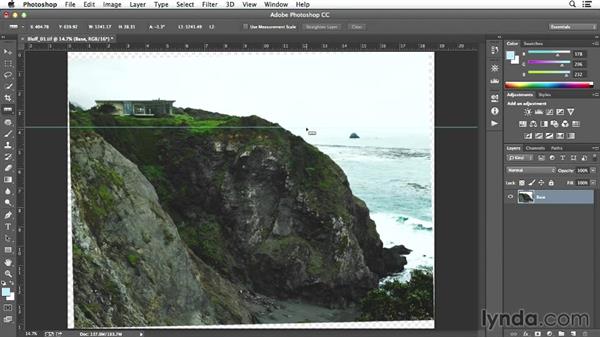 Join Richard Klein for an in-depth discussion in this video Adjusting the horizon on the bluff shot, part of Enhancing Exterior Architectural Photos.

I have the Bluff_01.tif open in Photoshop, and as I look at it, I can see that there was actually too much correction done to the rotation when we wrote this out of Capture One. So what I'm going to do is fix that first. So we'll go to the Background layer. I'm going to double click it, and we're going to call this base. One cannot free transform a Background layer. The first thing I want to do is to get the roof line of the house straight. As I look at it I can see it sloping down just a bit so I'm going to use command r to bring out some rulers and then I'm going to drag down a guide so we can take a peek.

And yeah, as you can see, the house is running downhill just a bit. So our first job will be to take care of that, and the way we'll do that is to get the measuring tool underneath the eye dropper. So, I'm going to click and hold, and pull down to the ruler tool. I'm going to zoom in, so I'm going to use Cmd+Option+0 to zoom into 100%. There we go. And what we'll do is we'll measure the angle of the house by clicking and dragging from one side to the other. Very good. And if you need to move it you could always go back and grab it, and move it around and get it reset, if you happen to wiggle your hand when you release the mouse or something like that.

Okay. Then we'll go to Image> Image Rotation > Arbitrary. And what happens now is that we've measured the angle using the ruler tool. And we'll go ahead and put the correction in. Now let's zoom back and take a peek and see what it looks like. So I'll go to Cmd+Option+0. Very good. So now you can see that the top of our house is straight and our horizon now is straighter. We do have some area that we need to crop off, but we'll deal with that in just a moment.

This, the house is really the star of the show, but the horizon will be distracting. So, I'm going to grab the corner. Here we go and pull it up and as I do this, I'm watching the horizon and it's a little difficult to see out there, but let's say about there. So as you'll notice with the bezier handle that pop out that at this point we are not putting any distortion into the image. So our house is staying the same, but our horizon as a matter of fact I can see I need to bend it just a little more as I'm looking at that. So then we grab it and we'll pull it up a little higher.

Okay, and, and again I want to come back and check the grid because if this had risen up, I would have pulled it back down again because we want to keep the distortion of our house the same. Okay well I'm going to say that looks just fine. I'm going to hit return to put that transform in. Now let's get rid of our guide, I'm just going to hold down the command key and hover over top of it and just drag it off the image. We'll go ahead and put a crop in so we can get rid of those edges. So I'll hit the c key for the crop tool. I'm going to zoom back a little bit, so Cmd minus so we can see a little better.

So we'll get these corners cropped. There we go. That looks good. I'll hit return. We'll put the crop in. Okay, so our next steps now will be to add a bit of blue to the sky, a touch to the water will warm up the landscape, so I'm going to save this file out as a partial. We'll open that up and I'll be right back with you. 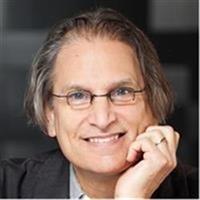 3/10/2014
Half of what goes into creating a great architectural image happens in post. When it comes to exterior photos, this could mean compositing multiple shots, adjusting the sky, or removing distracting elements. In this course, Richard Klein takes photos from two of his own location shoots and applies the same adjustments professional architectural photographers would use in their post-production workflow. He shows how to apply raw conversion for tonal, color, and lens adjustments, as well as noise reduction, before moving to Photoshop for compositing and sharpening. He also shares his action for sizing and sharpening images.

Want to see where it all started? Watch Richard shoot two beautiful homes, one Zen inspired and one midcentury modern, in Architectural Photography: Exteriors.
Topics include:

Video: Adjusting the horizon on the bluff shot