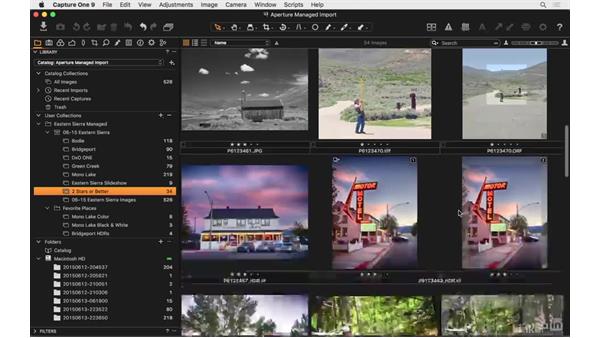 - [Voiceover] Here we are, inside our Capture One Catalog, and this is the import. And as you can see already, things look pretty good. I mean, the images look pretty nice. So let's see what's going on here. So up here, this is the name of the Aperture Library that we brought in. It's now a group, and it's called Eastern Sierra Managed Group. That's the same name we had for the library. So you might see it like this when it first comes in, and then you can open it up. And then inside of that, we have the project, and I had this project inside of Aperture, so that is pretty much the same.

By the way, what we're doing here, is we're still building previews, and then right here we have various albums. These are the same albums that we had in our Aperture Library. Now you see down here, look at this: 2 Stars or Better (1), 2 Stars or Better, 2 Stars or Better (mumbles). What is all of this? Well, when I was testing and playing around with it, I would create 2 Stars or Better albums, and I'd make sure it worked okay, and then I'd delete them. But somehow, even though I deleted them, they were retained, either by Aperture, or Capture One could see some history there, or something, and they brought those in.

So I only need one of these, so let's get rid of the rest of these. Yes, delete it. We're gonna keep this one here. These are the little surprises that, when you do this testing, that you go, "Wow, I never would've dreamed it would've done that stuff." So imagine, if you're doing a ginormous library transfer, and then this happened, like over and over again, and all the cleanup that would be involved. So that's something that I would investigate.

I'd try to find out what's going on with that, and see if I could figure out what was happening. We'll get rid of this one too. We only need one of these 2 Stars or Better. And then do another test, and see if I could eliminate the problem, and that's that back-and-forth I was talking about. Now, my slideshow turned into just a regular album here, and let's go ahead and just look at these images. They look pretty okay. I mean, I have to say. I mean, I know these shots pretty well.

I just hit Command + B to hide the browser there, so I get a better look. And I think I'm pretty happy with what's going on here. The colors look, if anything, just a hair better than what I was thinking before. So this is all very nice. Alright, so we'll leave that for the moment. Now here we have this group, Favorite Places. It was a folder in Aperture. I just hit Option + Command V. And inside of it we had these images, and these all came through.

So the structure was retained pretty nicely. Now, I think this is interesting. We had done a crop. Oh let's go 2 Stars or Better. I had seen a crop. Look at that. So it's even bringing in the crops. It remembers the crops, and it's doing a very Capture One treatment on my crops, so it shows me the original image, and it shows me the area that I cropped out. Here's a good view of one. So this was what was showing in Aperture, and then here's the rest of the image, and of course, it's non-destructive in both apps, but I think this is very interesting that Capture One does that for me.

That's pretty cool. So no real big surprises here, other than the multiple 2 Stars or Better, as I was playing around and doing my testing. Kind of, the take away there is, if you're creating a bunch of albums, and then you delete them, they may not really be deleted, and Capture One may retain them anyway. Now let's go down here. This is what's happening on the hard drive. So this is not a Managed Catalog at the moment, because if I click on Catalog, there are no images in there. So by default, what happens is, Capture One Pro sets this up as a Referenced Library, and the reference for this Library, is my container.

What that tells me is, that if we just leave things the way we are, that this container has to stay on the hard drive, or connected or whatever, in order for you to have full functionality in Capture One Pro, because it is referring to the images inside the container. Remember, if we do Control + click on this, we can Show Package Contents, and then we get into the Masters folder right here. This is what Capture One Pro is referring to right now, when it looks at these images.

So let's go back here, to Capture One Pro, and this looks very much like the internals of the Aperture database. So you can either leave this like this, and keep that Managed Library available, so that everything shows up properly, or if you want, you can create a Managed Catalog that would allow you to get rid of that container. And this discussion right here, again underlines, why it's so important that you have a backup, because if we start fooling around inside that Aperture container, inside that Managed Library, then it will not be the same again.

You will not be able to open it back up in Aperture and have everything work properly, because those Masters will be gone. Those Masters will be pulled out. If I take the Masters that are, let's say right here, if I take these Masters, and I drag them into the Catalog, then that Aperture container does not have them anymore, which means, then, if you try to open that container in Aperture, it's not gonna work properly. We're gonna do little bit more of that in the next movie. Right now though, I think our transfer went real well.

And again, I know I keep saying it over and over again, but it's so important: Make sure that you back up your Managed Library, before you do any of this work.