Differences between Mac and Windows versions 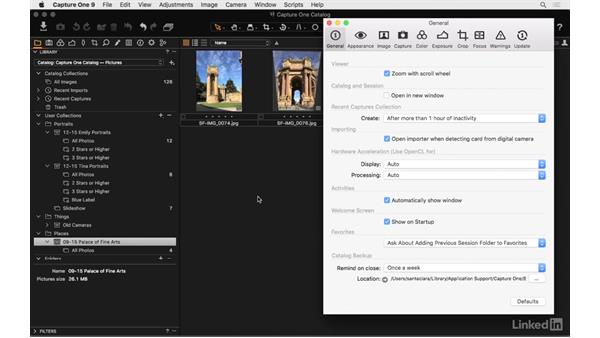 - [Voiceover] One of the things I really like about this application, and of course, you're going to hear many things that I like about it, but I love that it's both Mac and Windows compatible. And, for the most part, it's pretty much the same on both platforms. Now, I recorded this title on a Mac, and that was only because I had a Mac already set up in my studio. Otherwise, I would've done Windows. Because it's almost the same, it really wouldn't have been an issue either way. But there are some language differences, and there are just a few things that I want to make you aware of right now, so that as you're listening to this, if you're on a Windows computer, you'll go, oh, okay, yeah.

When he says Option, that means Alt. Now, most of these things, you'll know, but, hey, let's just go over them anyway. I just wanna make sure we're all on the same page, so we have a great time as we work through this application. So on Mac, when we say Control, yay, on Windows, it's Control. So, there you go, there's one instance where it's the same. It's not always the case that way. For example, on Option, on a Mac when I say Option, so I say, "Hold down the Option key." If you're on a Windows machine, you're going, "Yes, hold down the Alt key." Alt key for Option.

And then, here's kind of a biggie, it comes up every now and then, I'll say Control click on, it'll be something, to get a contextual menu, to get a pop-up menu. If you're on a Windows machine, right click. Right click is going to give you the same thing. So, on a Mac, you can usually do Control click, or if you have a two-button mouse on a Mac, you can do right click to get the pop-up menu. All right, now that's kinda the language stuff, and it's really not too bad, right? We're okay so far.

There were a few minor differences between the applications. I'll give you one right now. We're in the General tab of the Preferences. Here on my Mac, I don't have something here called Commands, but on Windows machines, you guys, you get Commands right here. Right between Warnings and Update. I wish we had it because it looks like you can do your own keyboard mapping for shortcuts. Seems like a really neat feature, and, you know, I'd like to have it, but I don't.

So we don't have it here. If you're following on Windows, you're gonna have it, and it might be something that you wanna take a look at. Now, as we go through the entire training, there's probably another two or three spots where I'm gonna say, "This is right here," and it might now be here. One of 'em, I believe, here, let me close out of this. If I were to do... I'm gonna go to... See, I don't wanna get too far ahead, because I haven't actually showed you any of this stuff yet, but let me just give you another example.

So we're in the Export dialog box here. And right here, I'm in the File tab of it right now, there's a File icon here, and you can check the box Create thumbnails on save. I'm pretty sure that's a Mac thing, because I believe that Windows automatically does that. So, there might be a couple of those. I've already showed you two of them, and I've only heard that there's a couple more.

And I couldn't verify them, but I was able to verify these. So, if you can bear with those other couple things, I'd be so grateful, Windows users. I know you're a very generous bunch, indeed. And other than that, that's it. Everything else is the same. So, a little bit of terminology, just a couple little things, like this File icon doohickey right here. And everything else, we're good to go. So, let's start playing with our pictures and get on with Capture One Pro.