Apply clarity to an image 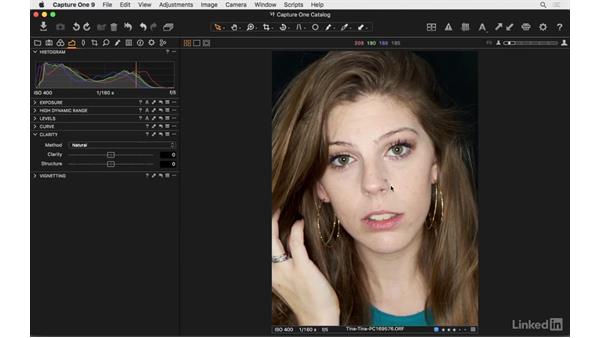 - [Voiceover] Clarity and Structure are two of my favorite tools in the Exposure tab mainly because they just have such a cool effect on the images. We're going to take a look at this shot here. We're going to enhance its texture with Clarity and maybe a bit with Structure also and then we'll work on a portrait where we soften things a bit using these very same tools. Now, we have a couple different methods here. We have Natural, Punch, Neutral and Classic. I tend to stay away from Classic. It's an older algorithm. I don't think it's quite as good as the other three.

Neutral is good for things like this and we're going to actually use Neutral. Punch is good for when you really want to make a sky dramatic, something like that. Kind of an HDR feel almost and then Natural is very nice for portraits and we'll use that in a few minutes but let's go to Neutral right now. Now, this image we worked on a little bit earlier. We did some exposure work on it and just to show you where we started, I'll hold down the Option key and that's where we started and we got it to this point using the exposure tools.

Now let's add some Clarity and Structure to it. Now, Clarity works a little bit better with the coarse textures. Structures more for fine details so let's go ahead and up it and boy, right away you can see a difference and these little guys right here, want to zoom in a bit. I'm holding down the Space bar by the way to reposition here. I'll go back to the pointer tool and let's do some fine detail and really keep an eye on this area right here.

We did Neutral for our thing and we're going to do Natural for Tina and it doesn't affect color very much. It's one of the reasons why I like Natural. It just mainly sticks with the midtone highlights and we're just going to take our Clarity and we're going to move it down. Soften things up. I'm going to hold down the Option key. Let's take a look at what we did. There's where we were. Is that nice? Just kind of soften things up, those coarse details. Now, I could do that with Structure also for the finer stuff but a lot of times if I'm moving Clarity way down, I'll actually move Structure back just a hair just to give us a little bit more in the finer details there.

They can compliment each other. See if that worked or not. Holding down the Option key. I could see a little effect. Not too much. Clarity's going to be our main tool on this shot here. I'm going to zoom in a bit just to see what's going on with the skin tones. Okay, let's do before and after now. Option key. Good. Alright, we'll zoom back out. Hold down the Option key here. Bring us back out.

I think we'll leave it just like that. I like it myself. Alright and then we'll go back to the camera just for one moment so we'll go back to our camera. We're going to take our loupe. Just kind of do a little bit of work here. Now you can see that even though we've done some pretty heavy Structure work, there's not a whole lot of artifacts. It has just kind of added some serious grit to things. Same thing in here.

It really hangs together very nicely. I like it. Now, just one last thing before we leave Clarity and Structure, I'm going to do Command R to take us back to the very beginning of this image. So there's where we started. Now we'll do Command Z. That brings us back. One more time. Command R. It's not just the metals. It's the glass too, isn't it? Command Z. Alright, so that's Clarity and Structure.

Think of Clarity more for the coarse details. Structure more for the finer stuff and then keep in mind that you have these four different methods. Neutral, more for things. Natural, more for people. Punch, more for kind of an HDR effect. Do that, show some restraint and I think you'll have a very good outcome with these two wonderful sliders.

Video: Apply clarity to an image