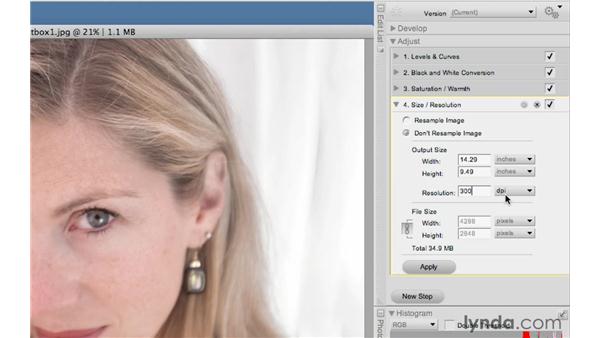 The first step in preparing an image for output is to get it sized properly, and like everything else in Capture NX, image sizing is a nondestructive edit. I simply go to the Edit menu and chose Size/Resolution and I get a Size/Resolution edit added to my Edit List. This is great because I can now create different versions, all with different sizes, and therefore keep multiple sizes of the same image all in one document, and all without really increasing the size of that document. This dialog may look a little complicated, but it's actually pretty simple.

If you just pay attention to what's going on, it serves as a really nice calculator for understanding the relationship of file size to output size and resolution. The key to understanding Size/ Resolution are these two buttons right here: Resample Image and Don't Resample Image. By default, Size/ Resolution is set to resample image. This means that Capture NX is allowed to change the total number of pixels in the image. If it needs to, it can throw pixels away or if it needs to, it can make pixels up.

Output Size is how big the image will be when printed. So right now if I print these 4288 pixels by 2848 pixels, they will come out to be 59.56 inches by 39.56 inches, and that's because my Resolution is set to 72. I want to talk for a minute about this term Resolution. Unfortunately, it's the term that's been kind of screwed up by the camera vendors. Camera vendors will say things like "This camera has a resolution of 13 megapixels." 13 megapixels is not a measure of resolution; resolution is the measure of the number of pixels that occur over a given distance, and 13 megapixels does not have a measure of distance in it.

The fact is, your camera does not have any particular resolution. Yes, in this case my camera always spits out images with a resolution setting of 72, but really all your camera does is spit out a bunch of pixels. It's up to you to decide how closely packed those pixels are, or how spread out they are. So right now these 4200x2800 pixels spaced so that there are 72 of them per inch, yield an image size of 59.56x39.56 inches.

In other words, it takes 60x40 inches to get all of these pixels down, when I can only put 72 of them down per inch. If I increase resolution, things will change. Now I want you to watch something here. I am going to say Don't Resample Image, and I am going to bump this up to 300 Pixels Per Inch, and when I do that, my print size goes down to 14.29x9.49. In other words, I've packed the pixels closer together and in doing so, they take up less space.

I would like to talk for a moment about DPI here. I wish Nikon had not done that. That should really say PPI or pixels per inch. Dots per inch is a term that refers to a printer. A printer prints with a certain number of dots per inch and image on your screen or camera has a certain number of pixels per inch, and that's a very important difference. For the sake of this movie, I am going to use DPI and PPI interchangeably. I am going to say pixel per inch, but I may dots per inch from time to time because that's what it says right here. Just note that I mean the same thing.

If I change my print size--for example, let's say I want to print this in a 10-inch frame-- it automatically recalculates height and my Resolution changes. This is because Capture NX is not allowed to change the total number of pixels in the image. Another thing to know about resolution: your printer has a native resolution that it expects images to be printed at. If you do not deliver an image to the printer at that resolution, the printer will resize it to that image. There is nothing wrong with letting the printer do this.

However, once you get involved in sharpening, you may find it that's its much better off to do the resizing yourself, where you have more control over final image quality. Therefore, Resolution setting is kind of critical when it comes down to print. You really want to be sure that your images are going to the printer at the printer's native resolution, and so you might turn to your printer's manual to look for this critical property of your printer, and I guarantee you will not find it in there anywhere. For some reason, printer vendors don't feel like you should know this information, probably because they think, well, our driver is good enough; you shouldn't be doing this manually.

Anyway, most Epson inkjet printers, fine-art photo inkjet printers, have a native resolution of 360 pixels per inch, while most Canon and HPs have a native resolution of 300. So let's say I want to print this out to go in a 10-inch frame on my Epson printer. So I want a Width of 10. Got that, great! I want a Resolution of 360. Wait a minute, Width changed to 11.9, hang on, put that back to--okay my Resolution is back up to 428. I can't do this. I can't get both of these put in here, because there's no way to change the Width without impacting the resolution.

I need to check Resample image. Now these are editable. Capture NX is allowed to discard information if it needs to, so I can change my Resolution to what I want and keep my Output Size the way that I want it. This is the difference between Resample and Don't Resample. A couple of other quick notes about this dialog box. I can change from inches to millimeters to centimeters. I can also change the File Size from Pixels to Percent. This can be handy way of saying, I want to knock this image in half.

I am just going to change it to 50%. Most of the time you won't manipulate this directly when you're preparing an image for printing, but if you are preparing an image for the web or for electronic delivery, then you may have specific pixel specifications. You may have a designer who is saying, I need this to be 800x600. So you could go in here and type 800. I can't type 600 also, because these two things are linked together to preserve the image's aspect ratio. If I want to be able to edit these independently, first of all, know that you will end up distorting the image.

I can uncheck this and now there are no longer linked, and I can do this kind of thing. I am not going to do that. Now it will recalculate if I enter a new value. Once I'm done, I simply hit the Apply button, and my image is shrunk. As I mentioned before, I can now save this as version, create another version with different size settings, and therefore keep multiple sizes all in the same document. If you're enlarging an image, you have some concerns that are a little bit different than if you're reducing an image, and we are going to talk about both of those situations in the upcoming movies.

2/23/2012
In this course, photographer and teacher Ben Long shows how to use the Nikon Capture NX2 photo-editing software to perform nondestructive sharpening, white balancing, tonal and color corrections, and more. The course covers how to set preferences and define an efficient postproduction workflow, how to perform and automate a wide variety of image edits, how to work with RAW files, and how to get the best results when printing.
Topics include: