Looking at some bells and whistles on the D500 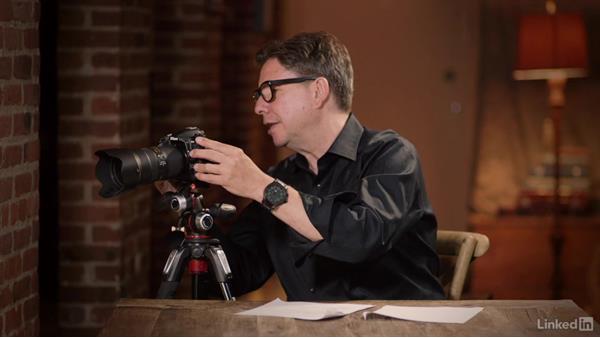 - Alright, before we get into the nuts and bolts of this camera, I wanna give you a little bit of a tour of some of the new and different features on the D500 that we'll dive deep into later in the course. The grip, the grip is underrated, but really important that the camera feels good in your hands, and that's one of the things I do when I try out a new camera for the first time, just to make sure it feels good, because I'm gonna be using it for a long time. This grip just feels really natural in my hand. I have average sized hands, but obviously it's made to fit a variety of different shapes and sizes of photographers.

The articulating touch screen, this is pretty amazing. It's over 2 million dots, incredible resolution and it allows you to scroll and as you'll see, you can actually take pictures with it using the touch screen feature; it's beautiful. As far as the buttons are concerned, Nikon made a few changes. They moved the Mode button on the top of the camera from the right side, near the shutter release, over to the left side, and they put ISO, because a lot of photographers were wanting to change the ISO on the fly.

I like to configure the light switch. And the light switch is when you turn the camera on, and then you go all the way to the right, it will turn on the light, which really helps you to see in the dark. What's nice about this camera is, it's got glow in the dark buttons, so in dim lighting, you'll be able to find your way around the controls, which is really nice. But you'll notice that when I turn the light switch all the way, the info screen came on. That's something I configured; it's in the custom settings, which is the pencil, and it's F9.

Scroll all the way down. By default it's up here, which just lights up the top control panel, but by moving it down here, this way instead of looking for the Info button in the dark, you just simply slide over, and not only does it light up and glow in the dark, but all your information is lit and ready to use, which is fantastic. The release modes, well, you've got a selection of release modes and the thing about this camera which makes it beautiful for sports and action is the frame rate in continuous high.

(shutter clicks rapidly) 10 frames per seconds, which is quite phenomenal. 10 frames per second, you can shoot raw 14-bit, uncompressed files and shoot up to 200 of them, the buffer just keeps on going and going. And part of the reason for that is, Nikon has chosen a two-card combination. You'll notice I turn the camera off before taking out the cards. The new XQD card, which came on the flagship high-end models has now migrated down to this one here, which in essence is the flagship for the DX.

It's a very fast card. It's a small footprint, which I really like. There are no pins that are gonna get in your way and it enables a very fast frame rate. Then the second card is the traditional SD card and it's nice. Whichever card you put in, you can have two cards in or you can have one card in; it doesn't really matter. Of course the auto-focus system, that is really something that you're gonna see is just amazing. Not only do we have 153 points, but 99 of them are the more sensitive cross screen points.

The system has its own module, and because of that and because of the algorithms that Nikon has used, you can track very fast-moving, even small items within the frame very, very accurately as we'll find out. We're gonna sort of configure and get to the bottom of auto-focus. The other thing about a smaller DX sensor versus full frame is the focus points cover more of the frame, which is a nice bonus. The i button will fast track you to a number of different menu items, and the custom control assignment is new.

We're gonna be using this a lot, it lets you program a lot of the buttons to customize for your personal taste and for the most efficient way of doing things. The ISO goes from 100 all the way up in high mode to a science-fiction-like 1,650,000. But it's a really nice quality, even at the higher ISO numbers, as we'll find out. The other pro features, there's 100% viewfinder. You've got this viewfinder blind here that was only found on the high-end cameras.

The other cameras had a little plastic piece on it. You put this on when your eye's not there in live view. You've got a locking diopter, which is really nice. Again, cameras that were not the flagships didn't lock. They had a different sort of cheaper version of this. So that's really nice. You've got 4K video. And then the other thing that the D500 introduces is this new snap-bridge wireless transfer system. You could be shooting, and you can transfer all your images to your smartphone device.

What's nice too is that it will read the GPS from your phone and transfer the GPS information wirelessly to the files in your camera, which is really nice. You can choose to download all the pictures, but because at 10 frames per second that's kind of a lot, I more often that not will choose the images that I want to send to my phone. And now, because I use Instagram and Facebook and Twitter a lot, for social media it's great.

I don't have to use my phone, not a bad quality, but the camera quality of a D500, the images that you can get with this in the field to wirelessly send them to your social media, that's really a very nice feature. So we've talked a little bit about this stuff. Now we're gonna dig deep and we're gonna dive in and we're really gonna tune this camera so that it sings. And you're gonna get images that you never thought were possible.

7/15/2016
The Nikon D500 digital SLR camera packs powerful features into an affordable DX-sensor package. The D500 shares many features with Nikon's high-end D5, including customization features that help you fine-tune the way the camera handles everything from focusing to exposure.

In this course, photographer, author, and educator Steve Simon offers tips, strategies, and tutorials for you to get the most out of your D500. He also calls out techniques that apply to the Nikon D5, so you can transition between both cameras.
Topics include:

Video: Looking at some bells and whistles on the D500