Key differences between the E-M1, E-M5, and E-M10 cameras 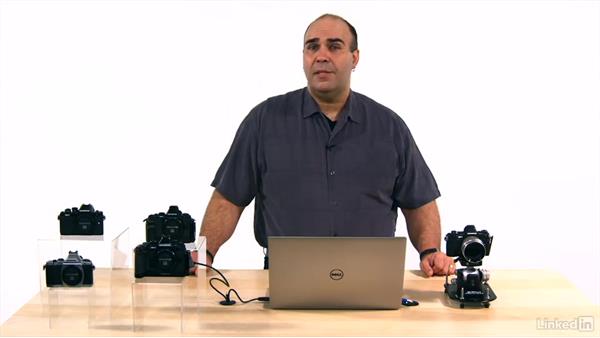 - Any of the cameras in the EM series are gonna give you great pictures, and they have wonderful options. There's in fact a lot of things in common with them. But there are some subtle differences and I think it's important that we talk through those before we jump into this course. Now keep in mind with these capabilities, you're gonna have to evaluate which ones you need and which price point you can afford. But let's compare some of the core features. Keep in mind that the EM1 is the flagship camera here in the lineup. While the EM5 and the EM10 are close behind in features.

The M1 is gonna offer the highest effective resolution of 16.3 megapixels. Now the other two aren't very far behind at 16.1 so you shouldn't notice much of a difference. But if you do need a ruggedized camera the EM1 and the EM5 are splashproof and dustproof. They're designed to handle temperatures of greater ranges, from all the way to 10 degrees below Celsius up to 40 degrees. That's about 14 degrees Fahrenheit all the way up to 104 degrees Fahrenheit. Now the EM10 doesn't quite stack up, it's designed to function between 32 and 104 degrees Fahrenheit, which would be 0 to 40 degrees Celsius.

Now this is still good, but it means that if you're gonna be shooting in winter conditions or cold weather, you need to be mindful if you're shooting with the EM10. It might not perform as expected. Now all three cameras offer great autofocus with 81 contrast detection points. However, the EM1 also has the ability to use 37 phase detection points, which could be particularly useful if you're using other lenses or converted lenses. All three cameras top out with an Expanded ISO of about 25,600. But keep in mind, you can't really shoot that high.

It's gonna give you a lot of noise. Now the EM1 does offer the best low ISO performance at 100, while the other models are gonna start at 200. This just means that you have more flexibility if you're shooting in really bright light conditions. Now, the stabilization on the EM1 and EM5 is fantastic, it was actually one of the first cameras to offer in body stabilization with 5-axis. This means that any lens can be used while still getting a stable shot, this is pretty cool. What it means is that if you're gonna be using things like the pitch, rotating here on the x-axis, or the yaw, rotating on the y-axis, it can stabilize.

Additionally to rotary here, or handheld movement up and down, it's giving you five axes of stabilization, all along the x, y and z axis points, as well as side-to-side movement. If you're shooting with the EM10 however, it's only gonna give you a 3-axis stabilizer. But the fact that the stabilization is in the camera is fantastic. And we'll talk more about stabilization a bit later in this course. The frame rates on all of these cameras are really quite fast. If you're using single autofocus, you can get up to 10 frames per second on the EM1 and EM5.

The EM10 is a little bit slower at about 8.5 frames per second. Now one of the things that I like about the EM1 is that is has the most in control buttons and dials. This means that it's a very tactile experience. But both the M5 and M10 still have lots of physical buttons and controls. The EM10 camera is the only unit with a built-in flash. Now, this is an easy accessory to add, they're often included in the kits, or you can pick up a very affordable one. Or Olympus offers more professional flash units as well. And we'll talk a little bit more about those later.

The EM1 and EM5 also offer a bunch of different white balance presets. These include things like auto, cloudy, and custom and flash. As well as different lighting conditions like fluorescent, incandescent, shade and sunlight. There's also one for underwater shooting. And Olympus does offer very robust underwater housings. Now the EM10 is much more basic, just with auto and custom, you can preset your own light balance on it but you don't have as many useful presets designed for specialty shooting situations. And as firmware updates come out or new versions come out, you might find that different features that weren't available at one point have now moved into another camera.

Olympus continues to upgrade their cameras and add more functionality, but this is a good overview of the core differences. Again, the lenses and all of the accessories, as well as almost everything we're gonna cover in this course will work with any version in the EM series.

6/14/2016
Whether you've been using your Olympus EM Series camera for a while or you just got the hang of it, there are a lot of options you can tweak. These cameras are packed with customization features that allow you to fine-tune the way they handle everything, from focusing to locking exposure. Plus, you can expand the uses for your camera by building lens kits and selecting essential accessories.

In this course Richard Harrington and Rhed Pixel demonstrate a set of customization strategies aimed at making your EM series camera far more responsive. They show you how to master the exposure by modifying ISO, aperture, shutter speed, and exposure compensation. They take you through several specialty shooting modes including Bulb, Art Filter, panoramic, and 3d mode. In addition to showing you how to get the most out of the in-camera settings, they show you how to control the camera remotely, connect the camera to Wi-Fi, record video, and more.

Get ready to go beyond the factory settings and make shooting with your Olympus EM-D series camera faster and more responsive with this collection of settings and customizing tips.
Topics include:

Video: Key differences between the E-M1, E-M5, and E-M10 cameras