Using CameraTracker to track a shot 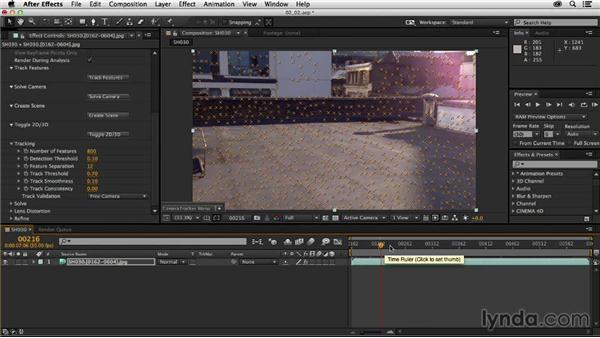 Join Andy Needham for an in-depth discussion in this video Using CameraTracker to track a shot, part of Creating a Show Open in After Effects and Cinema 4D.

So now we've talked a bit about our shot and what we want to achieve. We're going to look at camera tracking the layer. Before we do so, I just want to make sure that my Compositions Frame Range is matching my Layers Frame Range. And you can see this layer begins at 162 and if we press Cmd+K or Ctrl+K to bring up the composition settings. I just want to set my start frames to be 162. I'm doing this so that I've got a consistent start point for this sequence.

We know that shot three O starts at 162 and we can instantly see that, wherever we are in our project. When we send the project over to cinema 4D, we want our 3D rendered files to reflect the same frame range as our shot. Let's add the camera tracker effect to the layer and take a look at what we're going to do. So we'll go to Effect > The Foundry > Camera Tracker. Making sure that the layer is selected and the effect pops up into the Effect Controls panel. If you're unfamiliar with this plugin there is an up and running with the foundry's camera tracker course available on Lynda and I recommend you check it out.

As we've talked about, we can't just plug in a few numbers into the camera tracker and expect to get a decent result every time. It takes a lot of work to get a good result, and you'll find that your shot when you track it is going to be different to the way I track it now. So, just bear that in mind. You just need to stick at it, and eventually you will get a decent result. So, let's start by previewing the features that Camera Tracker thinks are good. These are the points that it's going to track through the shot.

And if we scrub along, the area that we're really interested in doesn't have a lot of points. We want to think about increasing the number of features. So let's bump that up to a large number, something like 800. And the reason for such a large figure is because we are going to be refining this shot and definitely deleting quite a lot of tracks. And because it's relatively featureless, the camera tracker is probably going to pick up and reject a lot of tracks as it goes through the tracking process.

So, we'll just go back here. One thing to mention is when you're upping your number of features, you kind of want to reduce your feature separation so we'll do that. Also these two parameters kind of go hand in hand. And I want to just scrub back to the beginning here and. Normally you could just mask out the sky and mask out other areas that you think aren't going to be of use. But with such a small area of parallax in these opening frames, we just want to give the camera tracker as much of a chance as possible.

And you know we know we're going to delete these points later. But if it doesn't have enough to begin with, we just not going to get an accurate solve. So, lets begin tracking the features. So this process will take some time. I recommend, if you have Auto Save turned on, with After Effects, and it's set to a low value, like a, just a few minutes, you might want to consider turning that off temporarily. Because if AfterEffects decides to auto save while the camera tracker's tracking, it will stop tracking immediately and you'll have to just re track the shot.

The other possible workaround is just choosing to disable this button, render during analysis. But I kind of like the information that the camera tracker plugin gives us. So I leave that on. This is going to take some time so let's just come back once it's complete. So the camera tracker has finished the tracking phase. And I'll want to start by deleting some of these points in the sky, because we know they're not going to be any good. So I'm just going to hold down the left mouse button and click and drag and just select some for these points.

And I'll press the Delete key to remove them. And I'll just go through getting rid of points that are not going to be of any use. So, we'll just do that here. And, maybe these ones around here as well. And you want to just look for any points that aren't following the motion of this shot. So, Camera Tracker will also just reject points as well and you'll find that when you press Solve so not to worry if you don't get them all. We certainly will get them all at some point.

So now that we've removed a few of the points in the sky we're ready to solve the shot. Which we'll look at later.