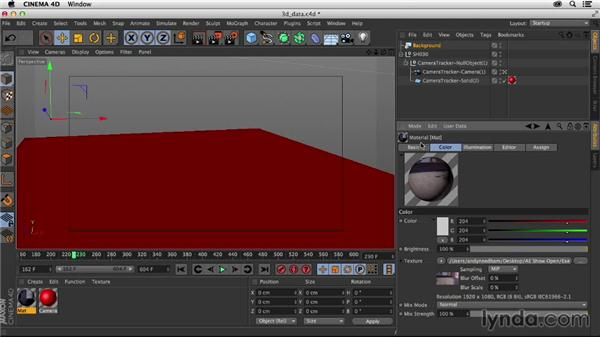 Join Andy Needham for an in-depth discussion in this video Importing 3D camera data into CINEMA 4D, part of Creating a Show Open in After Effects and Cinema 4D.

…In this chapter we're going to create our animation in Cinema 4D, and we're going to…bring in our 3D data that we exported out of After Effects to begin.…So, we'll choose File, Open, and we'll select our 3D data file, and,…what's important is the null, the camera, and the CameraTracker.…And the solid that we created to represent the ground.…So, if we move through we can see that clearly here.…We want to bring in a representation of the footage, just so we…can line everything up, and we want to, keep track of where we are.…

So we'll create a Background object.…And we'll create a New Material, to load the footage into.…In the Basic tab, I'm going to uncheck the Specula, and in the Color tab, I'm…going to go to the Texture field, and choose…this button here to open some new footage.…So, you want to make sure you navigate to the Shot 030 folder in the footage folder.…And choose the first JPEG, and click Open, and it's…just going to ask us if we want to create a copy.…