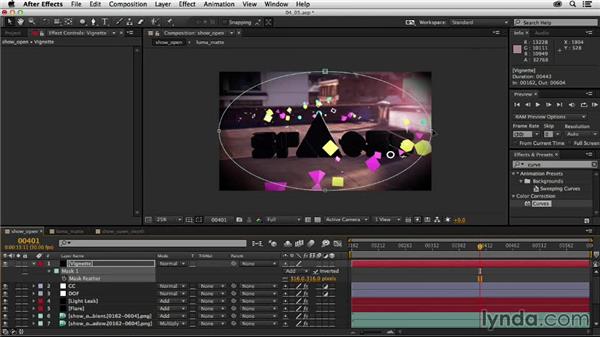 Join Andy Needham for an in-depth discussion in this video Color grading the shot, part of Creating a Show Open in After Effects and Cinema 4D.

…So with our 3D renders comped and the light effects…in place as well as the depth of field, there's…a few more things we need to do, to bring…this shot together and just make it all look properly composited.…And so we're going to begin with some overall color correction.…We're going to add this to a new Adjustment layer.…And I'm going to call the Adjustment layer CC and I'm going to add a curves effect.…There's obviously plenty of ways of doing color correction, but you know,…this is just one method, so we want to add a bit of overall contrast to the shot.…

And I think we want to then just look at the blue.…Maybe bring some blue into the blacks.…Looks kind of nice.…And I just want to bring this down a touch as well.…And I'm warming it up now by moving into the red channel.…Just getting that nice, kind of match that…we're getting across from this, from this sunlight.…And, I think I'm going to just leave that there for now.…Plenty of opportunity to tweak this, but we'll just see…what other effects we can add to make everything sit together.…