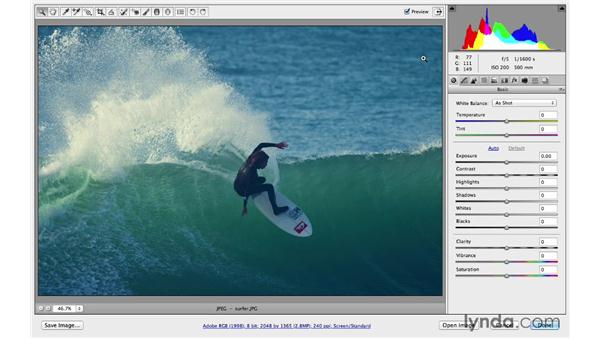 In this movie we are sgoing to stray off the well worn path, and what i want to do is kind of create a look which kind of feels a little bit like film. In order to buil or craft this look, we'll be working with a tone curve panel, the basic panel, and the effects panel as well. In this case, we're going to put together a lot of what we've already talked about, so if you haven't watched any of the previous movies, you want to go back and watch those before you get to this one here. We'll, let's jump straight to the tone curve panel by clicking on the tone curve icon. Let's begin in the parametric curve. In the parametric curve, what I want to do is bring up some of the darks there, just bring some light into this area of the image.

Also going to bring up the lights, and then just bring up the highlights a little bit. Again, a subtle adjustment but a nice starting point. Here's the before, then here's now the after. And I want to do this because eventually I want this faded, vintage kind of film aesthetic. After having made those changes, let's jump straight to the point curve. In the point curve, as we've started to see, we can work in the composite RGB channel or we can also go to the various color channels. Let's begin by going to the blue channel. One of the things that you can do is click to add a point and drag up or drag down in order to modify the color.

Yet you can also work on the end points and often in different types of photography modifying the end points can give you a really core interesting color look. Here in this image. Let's drag this black or the dark end point up with that. What we'll do is bring in some blue into the darker areas of the photograph. Then if we drag the white pointer, the brightest point down, what this will allow us to do is to bring in some yellows into the brightest area of the photograph. Well here you can see we're starting to craft a unique color. Then let's go to a few other channels.

We'll go to the green channel, we'll drag down, that will add a little bit of magenta. Let's go the the red, or the red cyan channel, drag down, that will add a little bit of cyan. And again here we're just trying to create something which is different or unique. Then I'll go back to the RGB Composite Channel and here I'm going to bring up some of the detail that I have here in the darker tones. I'm just going to modify this curve here, modifying the overall look in this image. Well after having done that, after having made these color adjustments, I want to finish this off by going to the basic panel.

And you may be thinking, Chris, this doesn't really look that interesting. Well stick with me. We haven't finished this project yet. We're just starting off, setting the stage using the parametric curve Next we'll go to the basic panel. In the basic panel I'll change the overall color temperature. Now this color temperature shift is going to add yellow on top of all of those underlying colors. Now had we not started it in the tone curve it wouldn't look as interesting. Next we'll add some contrast back. We'll do so by using clarity. That will bring in some nice texture and also a little bit of contrast as well.

Let's brighten up some of those shadows. And then let's darken some of the deepest blacks. Again here as you make your way to the basic panel, hopefully, You know how to navigate around these different adjustment sliders. But to review, temperature goes up, contrast goes up, shadows goes up, blacks goes down and clarity that goes up. Let's add a little of vibrance and color saturation here as well. All right well not that we've made all of these adjustments. We'll click on the preview check box. Here's the before and then here's the after. So really it isn't about a kind of an either or question.

Should we use the basic? Or should we use the tone curve? In this situation really it's about both of these adjustments together. Which help us to create this unique look. Well after having made those adjustments. Here what I'm want to do is skip ahead or fast forward. In one of our subsequent chapters we'll talk about the affects panel. I don't want to get into all the details here, but I do want to highlight how we can use these various sliders. >> To add film grain and also to add a bit of vignetting. Lets start off with the vignetting. If you drag this slider to the left you can see that you can darken the outer edges of the photograph. You can then further customize the characteristics of those edges by using these other sliders.

Again we'll talk more about how this works later yet for now I simply want to highlight how we can use these sliders in order to create a subtle sort of vignette type of a look. Then if we zoom in on the photograph, and here I'll click a few times with the zoom tool, we can work with the film grain. As we drag this to the right, you can see where adding some texture or film grain which really fits with this color aesthetic and with the vision for this project and that is to create this kind of vintage type of look with this photograph. You know? So often, we make adjustments like this to our pictures using Photoshop. Yet, we can also do similar things as you can see here, right inside of Camera Raw. Well, let's evaluate the overall before and after. To do so, click on one of the last two tabs.

Then next, click on the preview check box. Here, you can see the original image as it was captured. Click again. You can see, after, we've applied and created this unique effect. Let me zoom out a little bit, so we can see the whole image. There it is. Here is our overall before and then now our after.

6/27/2013
Get in-depth training on Camera Raw 8, the Photoshop component that enables photographers to make nondestructive corrections and improvements to photographs. This installment of Photoshop CC for Photographers takes you deep into selective adjustments and blemish corrections. Author Chris Orwig shows how to enhance eyes and whiten teeth with the Adjustment Brush, correct overexposed skies with the Graduated Filter tool, and remove general dust, noise, and scratches. Then dive into the Curves and HSL controls for improving color and tone. Chris also includes a section on Camera Raw's Lens Correction toolset for removing distortion and chromatic aberration in your photographs. Last but not least, discover how to harness presets, actions and the batch processing power of Bridge, and camera calibration controls to speed up your workflow and get great looking results every time.
Topics include:

A: We added videos covering the new Preview feature, introduced in Camera Raw 8.4, and duplicating Adjustment Brush settings. Chris also revised the chapters on the Graduated Filter and Radial Filter tools.  Check out the "What's new?" movie for an overview of these changes and the other enhancements Adobe introduced in the 2014 update to Photoshop CC.

A: We added two new movies, which describe changes to the preview behavior in Photoshop CC 2014.1 and the new improved spot removal with feathering. New movies contain the "CC 2014.1" tag next to their names.