Installing Git and Node on a PC 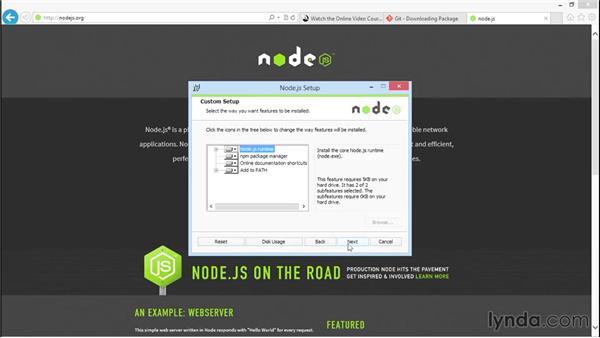 In order to work with this project, we're going to need to do some installations. Now first, we need to make sure that we have copies of Git and Node. If you watched the previous video, those were the installation instructions for Mac. I'm going to walk you through doing that on a Windows machine. Now, Git is a version control system that let's you manage changes to a site by creating commits and branches. In this course we're going to use Git to download a template for our projects. And if you want to learn more about Git, we've got a great course from Kevin Skoglund called: Git Essential Training.

Now, to download Git you need to go to the Git website at this URL. And click on the Downloads for Windows. Then wait for the application to download. And I'm going to hit Run right here. And go through the installation prompts. Now here I want to make sure that I install something called Git Bash. So the default options should be fine. And I'm going to hit Next. And here I'll select: Use Git from Git Bash Only. And then click on Next.

And the first default is fine for this one. So we'll wait until this installation is done. I don't need to see the release notes, so I'm going to click that off and hit Finish. Now next, I need to install a copy of Node.js. To do that, we need to go to this URL and click on this Install button. Go ahead and run the installation.

So once that installation is finished I'll click on this Finish button. Node.js is a platform for running JavaScript on the server. In this course, I'm going to be using it to manage our workflow and take care of common tasks like processing SAS, modifying our JavaScript, and running live pre-loading of any changes we make to files. Now once we finish the installations, you can check to see if you've got Node using the Git Bash application you got when you installed Git. So I'm going to go to the Start menu and find the Git Bash application, it's right here.

Now let's check to see if we've got Git and Node installed. We'll run a Git minus minus version, and you should get a version of Git back. And we'll do a Node minus minus version command, and you should see a version for Node as well. Installing Git and Node is real common on modern web projects. They'll give you some capabilities that are essential to work in with an efficient workflow

9/23/2014
Learn how to build dynamic, responsive single-page designs with HTML, JavaScript, and CSS. The website featured in this course combines docking navigation, columns that adjust without cluttering your site layout or HTML markup, and animated scrolling effects that respond to user direction. Author Ray Villalobos shows you how to build it. He starts with a lean, easy-to-read template, and then explains how to add the features that make single-page designs so great, with these four frameworks:

But this course isn't just about the tools. It's a realistic project that epitomizes many of the design challenges website developers face in the real world. Start watching now and learn how to use HTML, jQuery, and CSS to build your own dynamic, deeply responsive designs.
Topics include:

Video: Installing Git and Node on a PC