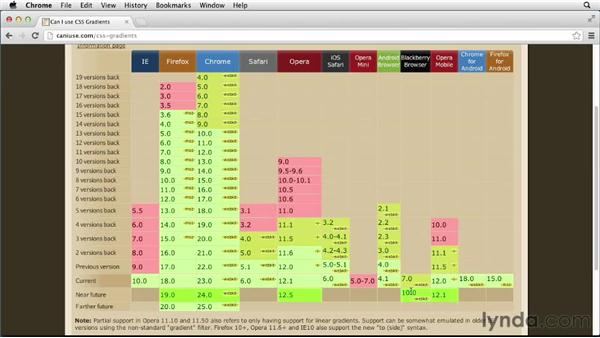 As CSS3 continues to evolve and change, we have to ask ourselves what browsers are currently supporting these awesome new things that we're starting to use in our designs? One of the great sites for this is something called caniuse.com, that's just caniuse.com, and if you go that /css-gradient, you'll actually see a full chart of support that refers to where CSS gradients are supported in modern browsers, and so you can see here the list of exactly where they're supported. Now the green means it is supported, the pink or red means not supported, the green means it's partially supported and then the gray means, eh, we don't really know yet.

And so, in this you can see here that Chrome is definitely leading the chart for CSS gradient compatibility, all the way back into 4.0, it's supported them partially and then it started being supported in version 10. You can also here that Firefox didn't really support it until about version 3.6, but now they have full support. Internet Explorer is the one that's lagging behind, because only currently version 10.0 supports gradients. You can get away with it in version 9.0, because of the fact that you can use SVGs to sort of fake your way through it.

And then Safari, they didn't support it up until 4.0 and then they only had partial support at best, but now the modern versions of Safari do support it. And Opera; pretty good support there. iOS Safari, it's getting there, Opera Mini, not so much. Android browser, they do support it in 4.0 and 4.1. Blackberry, I'm not sure how important those guys are anymore, but you know, nonetheless they are on the chart. So this is a great website, because you can come in and you can say okay, of the web browsers that I have to target--because as a web designer we have to target all of these browsers, which one of these is going to support these awesome new features that I am starting to use in my designs? There's a note here at the bottom that tells you that partial support in Opera 11.1 and 11.5 also refers to only having support for linear gradient.

Support can be somewhat emulated in older versions of IE using the nonstandard gradient filter method. Firefox 10+, Opera 11.6 and IE 10 also support the new two side syntax, and so all of this information is very relevant to everything we're going to be talking about. So I would suggest if you're concerned about older browser compatibility, just come to this site and you can see this entire compatibility table for support of CSS gradients, on both Desktop and mobile browsers. Now, in order to get around this lack of support in older browsers, what you need to remember is that you always have to create fallbacks, and I have got a movie later on in this course that explains to you exactly how to do a fallback, both with just a regular color and also with images as well.

So anytime you're just starting to use some of these newfangled techniques that you see popping up in CSS3, my suggestion is to go to something like this, find out where it's supported, how it's not supported in other browsers, and then find a way to fix it. Otherwise you're just going to be leaving most of your users out to dry, because not everybody upgrades their browsers as much as web designers do, after all.

2/15/2013
Join Justin Seeley as he introduces gradients, a somewhat hidden strength of CSS that allows you to add depth and texture to your web designs while reducing load times—creating a better viewing experience for your visitors versus static images. Discover how to create simple linear and radial gradients; apply them to backgrounds, buttons, and text; and write browser-specific syntax to ensure your designs look the same across multiple platforms. The course also shows how to create metallic textures, diagonal gradients, and repeatable patterns. Along the way, Justin demonstrates real-world uses for gradients and techniques to extend them beyond the basics.
Topics include: