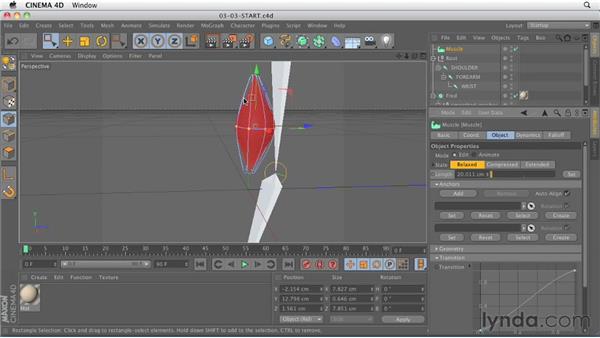 In animals and humans too, our skin is stretched over muscles that give our body shape.…In R13, the new muscle system can give your characters any kind of shape you can imagine.…What I have here is a very simple arm setup. I've got some joints and an arm…mesh, so you can see that I have animated it, so that at frame 30 the arm…curls up, and then it goes back down again by frame 60, so let's rewind it back to time 0.…What I want to do is, I want to have this bicep deform as the arm curls up and…that will be a much more natural state than just simply the rigid movement…that it has right now.…

So I need to use a muscle to do that, let's go to the Character menu and add…in a Muscle object, and the Muscle object, when I first add it, is going to be…huge, so what I want to do is I'm going to need to model this muscle into…position on the arm.…Before I can do that, I need to move these yellow balls called anchors, and…these anchors need to be in position on the character where the muscle needs to start and stop.…

1/26/2012
This course spotlights the R13 update for MAXON CINEMA 4D, which includes some key improvements in the rendering, shader, and character tools. Author Rob Garrott shows animators how to find their way around the interface, and demonstrates features such as the Physical Render engine, with its camera and depth of field and motion blur controls; the CMotion system for creating parametric movement; and the new and revised shaders. The course also covers the streamlined workflow for Adobe After Effects Exchange and the new file format options OpenEXR and Xref.
Topics include: