Why we sketch first 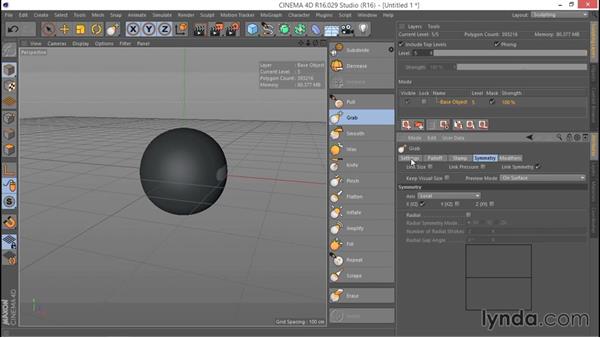 Join Adam Trachtenberg for an in-depth discussion in this video Why we sketch first, part of Hard Surface Sculpting and Retopologizing in Cinema 4D.

- While much of the design process for our ship will take place in the sculpting phase, it's important that we begin with a polygonal model that roughly resembles the final shape we intend to create. If we don't start with a reasonable approximation, it will cause problems once we begin to sculpt. A quick demonstration of what can go wrong will provide a better understanding of what we should do to start out on the right foot. So what we're gonna do in this phase is start out with a basic sphere primitive. So go up here to Primitives and create a Sphere. Let's go to the Display options and turn on Quick Shading with Lines so we can see what the structure of the model is.

And we don't want Standard because it has triangles at the top, and you generally want polygons for sculpting, so we're gonna switch to the Hexahedron primitive and then we're just gonna make it editable. So we'll do that. So we've made the sphere editable, and you can tell that it is by just going into Points mode or Polygons mode. And now we're going to go into the sculpting layout. So in the top right up here, you see your dropdown for different layouts that come with CINEMA 4D, and we'll just scroll right down to Sculpting and click that.

Now with the sphere selected, we're just gonna hit the Subdivide command one time. And before we move on, let's go to the Object Manager, which is over here. And you can see that when you subdivide a model for the first time, CINEMA creates a sculpting tag for you. And the sculpting tag is basically your entry into the sculpting toolset. So if we go back to this Sculpting Layers tab, and let's take a quick look at that. We're gonna get into this in much greater detail later on, so I'm not gonna be too exhaustive right now, but you can see that we have one subdivision level, you have your Polygon Count, which is 1,536 polygons.

And let's subdivide this two or three more times just so I can make the point that we need to make here. So we'll go one time, that's 24,576 polygons. And one more time. I think I hit that twice. Well, that's okay, we now have 393,000 polygons and five subdivision levels. So the mesh has become really so dense you can't even see the geometry anymore. It's just the lines that you're seeing. So let's go back to our Display options and go back to just Quick Shading.

Now we can see the sphere again. Let me demonstrate for you why you wanna start out with a model that's pretty close to the shape of the model you wanna wind up with in sculpting. And now, it doesn't have to be really close to an exact match, it just has to have the right number of extrusions in the right places so that you don't have to make drastic changes to the geometry. So let's demonstrate that by first going into the Sculpt tools, and we'll go down to Masks and activate the Mask tool. And as before, there are many settings in the Sculpting toolset for the brushes.

And I'm not gonna go through them all right now cause we're gonna go into it in much greater detail later, but we do want to go into the Symmetry settings. I'm just gonna click Link Symmetry and I'm gonna click X symmetry. So now we're gonna draw just a little bit of a straight line on the sides of our model to represent where the wings are gonna be extruded from. So we'll just draw straight out, very good. We'll go to the, back to the Sculpt Mask tools and go to Invert Mask. So now everything is masked except for the area that we want to pull out.

And let's go to the Grab tool, which is used for pulling polygons and points. And what I wanna have here is a very large radius so I can pull this whole section out at one time. So we'll go into the Brush settings and I'm gonna drag this up to 100, which is as far as the slider goes. And I would still like it to be bigger than it is, so here's a tip for you. In CINEMA 4D, when you find a slider that doesn't go as far as you'd like it to, you can generally still grab these arrows and drag them up to reach higher levels.

So I'm gonna go really just very high, up to maybe, 256 is fine. So now let's get more of a top view and let's just pull this straight out or as straight out as we can. And it's good with the Grab tool to do a bunch of small moves instead of one large move. That way you don't get quite as bad a distortion of the mesh. So let's just rotate around to make sure we're going in the right direction. It's going a little down. Want it to go sort of straight out.

So that'll serve our purpose. Now let's go back to the Mask settings in Sculpt and just delete the mask, so Clear Mask. So that's not very attractive right off the bat, but let's get a better idea of why it's a impediment. At this point, let's go to our Content browser, which is another tab over here, and we'll go to the Presets. And there's, and go to the Sculpting Presets. We will go to the Sculpt Brush Presets.

And then for this purpose it doesn't really matter which one we choose. We'll just pick something interesting, like Organic. And let's use the, let's say, reptile skin. So we'll double-click on that. Just make sure, let's go to our Brush Settings and make sure that loaded. It did. Okay, do I've just clicked on the Stamp tab of the Brush Tool. The preset has activated the Repeat sculpting brush. And we can also see that it's enabled the Stamp function and it has loaded a bitmap into the image shader, and a preview of that is down below here.

So let's just go back to our Settings tab and just see what it does. So we'll just drag on here. And you see that it's actually sculpting in something that looks like amphibian skin or something like that. Undo that. I'm gonna increase the Pressure just so we get a more definitive view of what's going on here. You can also see that when I'm drawing, there's a blue line behind the mouse. What that is, is the Steady Stroke function.

That's enabled, and Steady Stroke actually just smooths out your mouse movements. The higher the steps for the length, the smoother it gets. So let's just keep drawing here and drawing here and drawing here. And let's go into the wings. And you see, once we get onto the wings, it's not really working. And that is why we have to have a good model to begin with. And the way you can really see that is if we go back into Lines mode, Quick Shading Lines, and now let's zoom way in.

And you can see that even though we had, like, a huge number of polygons. Well, not huge, but we had a lotta (laughs) polygons. We had, like, about 300-some thousand polygons. The grabbing and just pulling a small section of it out really kind of destroyed our ability to do additional sculpting on that area that we extruded. You can see that it's having some effect, but there are all these horizontal subdivisions of the mesh and very few vertical subdivisions. And that is a real impediment to sculpting.

Now that we've seen the problems that arise from a too-simple base model, we can apply what we've learned to create one with with just the right amount of detail. 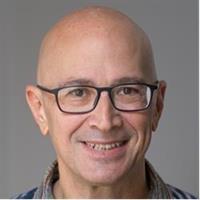 3/17/2015
Using CINEMA 4D's sculpting tools, you can create hard surface models without the constraints imposed by traditional polygon and NURBS modeling techniques. Then you can retopologize your sculpt to produce a lighter model more suitable for complex scenes and animation. Your sculpted model becomes, in essence, a frame around which you can build a well-constructed polygon model.

In this course, modeling expert Adam Trachtenberg shows viewers how to use the sculpting tools in C4D to create a hard surface model, retopologize the sculpted model, return to sculpting mode to add fine details, and generate texture maps that approximate the illusion of detail—without the weight of polygons. He demonstrates the steps using a fantasy spaceship model, the kind you'd see in professional video games, television, or feature films. Watch and learn how to use these techniques to build your own.
Topics include:

Video: Why we sketch first