What is the Physical Render Engine? 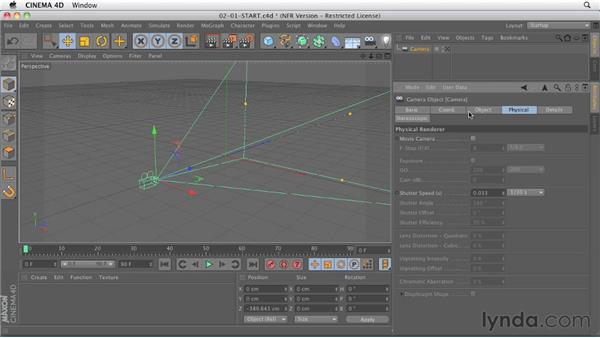 Join Rob Garrott for an in-depth discussion in this video What is the Physical Render Engine?, part of Cinema 4D R13 New Features.

If you have the Broadcast or the Studio versions of CINEMA 4D R13, then you've got access to an entirely new render option, Physical Render. This new option is designed to make the 3D render engine behave much more like a real world camera that has controls for exposure that affect how your image looks. Now there has been a lot of hype surrounding the Physical Render Engine, but really what is it? Well, what it is is two things. It's a camera object with a new set of controls and it's a new render option. The camera object, which we'll go into more detail later has a new Physical tab and it's got some different object properties, and these object properties combined with the Physical tab allow it to behave in a much more realistic way.

Now when you combine this realistic camera behavior with the new render options, if I hit Command+B or Ctrl+B on the keyboard, there's now a new pulldown here in the Render settings and I can select from different rendering options. Now there's Standard which is the default and then Physical. When I select Physical, nothing special happens except that I get a new option down here, and this new option now is the Physical Render, and the Physical Renderer combines with the camera settings to determine how your image looks and that's really what it's all about. The render engine combines with the camera object to determine how your image looks in a much more realistic way.

Now that doesn't necessarily mean that you're using photorealism, it just means that the camera and the render engine behave in a more realistic way, using things like shutter speed and exposure to determine what your image looks like.

1/26/2012
This course spotlights the R13 update for MAXON CINEMA 4D, which includes some key improvements in the rendering, shader, and character tools. Author Rob Garrott shows animators how to find their way around the interface, and demonstrates features such as the Physical Render engine, with its camera and depth of field and motion blur controls; the CMotion system for creating parametric movement; and the new and revised shaders. The course also covers the streamlined workflow for Adobe After Effects Exchange and the new file format options OpenEXR and Xref.
Topics include:

Video: What is the Physical Render Engine?