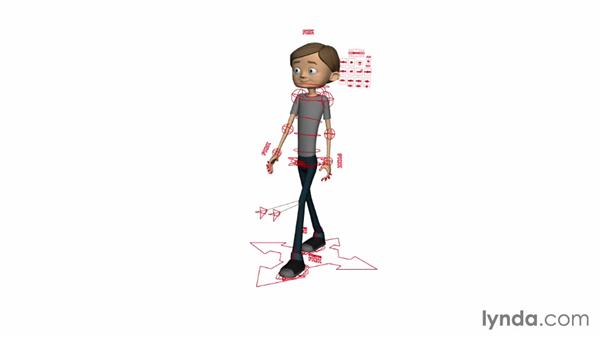 When you animate a walk, you can do it in one of two basic methods. One is to animate the actual walk through space. The other is to do a cycle. So, the basic walk itself just moves through space. So, when we take a look at this rig, you'll see that the main node here doesn't move. And the character basically is moving off that node. And the feet and the hips are actually translating in space.

Now, this is particularly useful in things like games where you'll have a character walking, but you really don't know where he's going to be until the game engine puts him there. This can also be good for things like crowd animation or other sorts of visual effects. So what you do is you basically just animate the cycle and you move the character later. Let's take a look at this a little more closely. And we'll have these two characters side by side so you can see the differences precisely. So as you can see, Emma is walking through space, but Walter is actually cycling.

So you can see that his main node has to move in order for him to appear to move forward. So, I'm actually animating this node. Now, with Emma, she's basically just walking through space. So each step is a set of key frames. So, depending upon how you want to animate a walk, you're going to choose between a walk cycle or a standard walk. Now in this chapter, we're going to do a walk cycle.

We actually did a standard walk in our previous title, which is called Foundations of Character Animation. So if you want to understand how to do that, you can certainly refer to that title. So in the next lesson, we're going to show you how to animate Walter in a walk cycle.