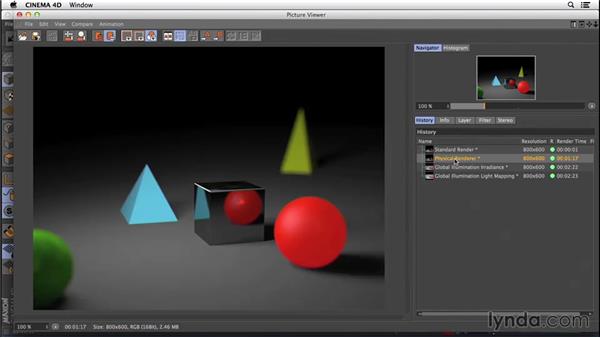 A render engine is the part of a 3D software application that determines how the files are going to look when you actually render them out of the application. Now, I know I just used the word render in the definition, but that's literally what's happening. In any 3D application, for example, Cinema 4D, when you've finished creating whatever it is you're creating in your virtual 3D world, you want to go ahead and render out something to have a still image to post on your website, or to create an animated video that you can broadcast and air.

There's the standard renderer that's inside of Cinema 4D, and that's what we're looking at here. Notice this ball looks kind of flat. The reflection looks a little bit fuzzy. This ball over here looks kind of interesting because it's got high reflection. And that pyramid back there is also kind of flat. Well, let's look at the physical renderer. This is a render engine designed to simulate shallow depth of fields, and to give you the tools you can use to be able to simulate real-world situations.

Doesn't that cube look a lot more photo real? It almost looks like I could reach and just pick it up off the table. That's because it's got this strong depth of field. Now, the next two renders were from global Illumination with the physical renderer. You can actually combine the two in Cinema 4D. So, the first version of this had an irradiance pass. So, what this is, is a method for computing light throughout the scene. See, global illumination takes light and actually tries to figure out how it bounces around off of different materials.

The standard and physical renderer don't bounce light at all, so global illumination is kind of special like that. Now, when I go to Global Illumination Light Mapping, notice that only took one second longer to render. But, if I click back and forth between the two, you can see just how much more bright the scene is and just how much more photo real this reflective cube in the middle looks. So, when it comes to actually rendering out your project, you need to render it out of a render engine. And whether you decide to render it using global illumination, or the physical renderer, or the standard renderer, is entirely up to you.

Just understand, for each different iteration, it requires different technical considerations. Also, the render time. I mean, look at the standard renderer. It took one second to render that. Global illumination? Two minutes, 23 seconds. So, sometimes you get what you wait for.