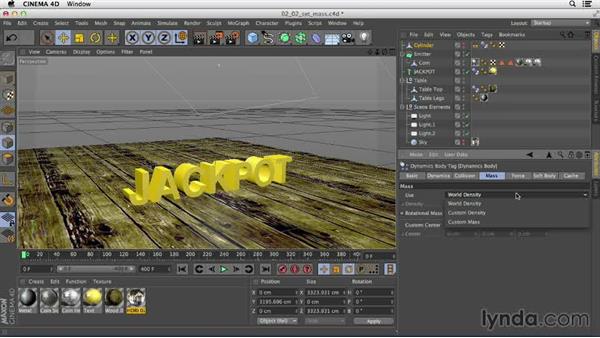 In this video we'll have a mini physics lesson to help understand the difference between mass and density, and how it relates to our dynamic coins, to making them fall more how like they would in real life. So first let's get rid of this funnel here. We're just going to click these stop light buttons here, to get rid of visibility in our view port. And we're going to navigate to our Dynamics tag on our coin, and we're going to go to the Mass tab. So, you have a few options under the Use tab.

You have World Density, Custom Density, and Custom Mass, where you can define either the mass or the density. It helps to understand the differences between the two properties, as it relates to Cinema 4D's dynamics engine. So say you have one pound of gold, and one pound of aluminium. They both contain the same mass, one pound, but it takes a lot more aluminium to get to one pound of gold. So the mass is much more dense in the gold, and the volume is much smaller.

So mass is a measurement of the amount of an object, density is measured by how much mass is packed into that object. In the case of how mass and density work in Cinema 4D, by default, a density of one assigns a mass of one to a cube with a length of about 100 centimeters. So what we need to do is adjust this because we want to set the mass, independently from the size of the object, because coins, while small, are heavy because of how dense they are.

So let's go and choose a custom mass and set it pretty high. Say about 5,000. Now let's talk about rotational mass. The use custom mass only applies to linear movement so we also need to adjust the rotational mass to a higher value as well. The higher the value, the harder it is for the object to be rotated. Let's go with 150. So let's hit play. So you can see our objects now appear heavier as they slam into the text on the floor.

They feel like the hit was more of a thud with less bouncing and less movement after the initial contact with the table or the text. So it's important when playing with dynamics in Cinema D, that you really understand density and mass. With the wrong settings an anvil can be treated like a feather, or vice versa in the dynamic simulation.

2/27/2014
Create your own "pennies from heaven" scene with CINEMA 4D. This project based learning experience shows how to use C4D's Dynamics module to animate falling coins that bounce and collide realistically. EJ Hassenfratz sets up a particle emitter to create a stream of coins from above, uses rigid body tag properties like mass and density to apply real-world physics, and the Dynamic module settings to control object interactions. He'll also show how to add polish to your project using blur and depth of field in After Effects.
Topics include: