Understanding the importance of object hierarchy 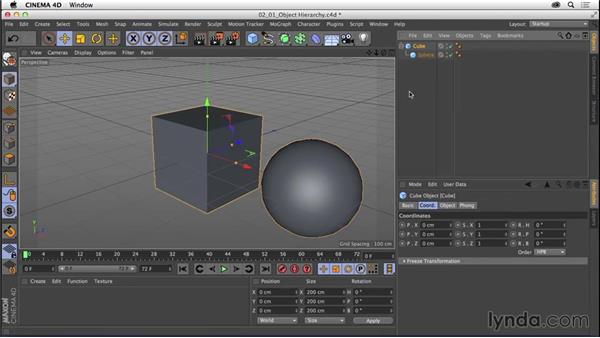 So, we need to add some geometry so we can see exactly what's going on. Let's get started by moving up to our cube primitive icon. And just click once to add a cube into the scene. Once it's been added into the scene I want you to make note as to where it is. If we go to the coordinates channel in our attributes. You'll see it's at zero zero zero. Which is the origin of the scene. Anytime you create a new object, it's going to be orientated to the origin of the scene. Now, let's go ahead and add a sphere. I'm going to go back up to my cube icon.

Click and hold with my mouse, and then navigate over to my sphere. With the sphere on the scene, you can see I have sphere and a cube. These currently are peer objects. They're oriented on the same level. So they're both just oriented to origin. Not you can see, well, actually you can't see my sphere because it is inside of the cube. So I want to move my sphere along the x-axis which is this red line. And I want to move it on a positive number so it moves in the direction of the arrow.

So with this sphere highlighted in the objects manager. I'm going to go down here under the coordinate section and click and drag up on arrows. Into we get close to around 307. Now you can see this is that 300 on x, and zero on the y, and zero on the z. So Whats going to make the sphere of the child of the key. Go to your objects manager. Click and hold on the sphere and drag down. Drag down over the word "cube" until you get this down arrow with a box. When I let go, now the sphere is quite clearly the child of the cube.

So if I go and click on the cube here. You can see, okay it doesn't really look like anything's changed, it's still at zero, zero, zero. Well let's go over to our rotation settings over here, with the letter R. I want to rotate the heading, which is where this H is, I'm going to Click and drag up. To rotate it around towards the z-axis. Remember the z is this blue line here, so I'm going to drag up till it gets. Let's drag it to 98 degrees, okay? So it's almost behind my cube currently based on our view.

Now let's go ahead and click on the sphere. And if you notice, it's still set up at 300 on the x, zero on the y, and zero on the z. But if you look at it in the scene, even if we orbit around, you can tell well that doesn't make any sense because it's definitely navigated further down on the z-axis. Well what gives? What gives is the fact that it actually is oriented based on the cubes orientation. So to see where this lives in the world we can go down to the coordinates manager.

The default settings for the coordinate manager here is set up for the object setting. So if you notice under the coordinates it's set up at 300 on the x, zero, and zero. Which is exactly what we have for attributes. But if you click on this pull down, and change it to the world setting. Notice, now, I can see exactly where this is in the world. It's at 41 on the x, and 297 on the z. And it's been rotated 98 degrees. Funny how that works because that's exactly what we rotated the cube.

If you really want to see this without having to come down to your coordinates manager. Here, I can go and change it back to my object's settings. All you need to do is just click on the sphere and drag up above the cube until we get that left arrow. Letting you know it's moving up, out of the hierarchy. When I let go, now you can see where it lives with in the world and it's no longer oriented to the cube. If I click on the cube and then adjust it's rotation, nothings going to happen to the sphere because. This sphere is no longer the child of this cube.