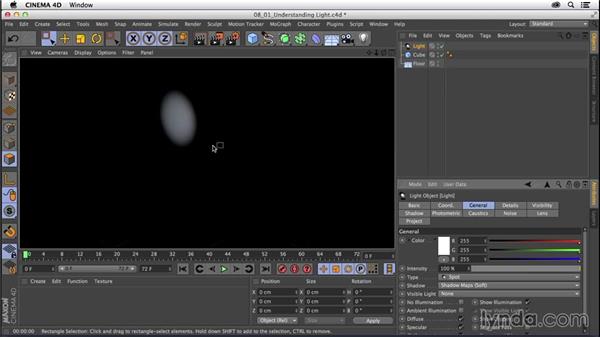 In order to understand how light works in Cinema 4D, you need to be well aware of the technical limitations of working with lights. And these technical limitations are across many different 3D applications. Now we'll get to those in a quick second, but for this video, we're going to go ahead and create a scene from scratch, and I want to show you how light functions to actually add a style and dramatically change what it is that you're looking at. So, to start, let's create a floor plane. Go up to your de-former objects and just click the button just to the right.

Once you have the floor plane in the scene, if you render you can see it goes on forever. So, it's actually a great tool to use when you're first trying to create something to light, that way you don't have to worry about what's going on in the background. Now I could apply a material to this floor, but I want to focus solely on how light functions. Now just so that we have a subject, let's click on the cube primitive to add it to the scene. I'll hover over the y-axis and move this cube up until it pops up out of the ground, and then I'll just bring it down until it just intersects with the ground.

Now as a general rule when you're working with squared off objects like this, you want to try and have slightly round edges, so I'm going to enable fill it here, and I'll just change the radius down to something like three, so it's a really narrow edge. Now, if we render what's going on in the scene here, you can see those edges do a great job of picking up the default light that's actually in the scene. But notice, even though we have a floor plane, we can't see any sense of dimension as to what's going on. We need to get rid of the default light in Cinema, and actually create our own lighting setup.

So if you go to the right most button in your toolbar, click and hold on that light. You can see we have multiple kinds of lights that we can use to light our object. So, I'm going to start with a spotlight. When we add a spotlight into the scene, notice the scene goes completely black. If we were to render this, you could see nothing. That's because the light was created right at the origin of the project, and the cube is at the origin of the project. So, we need to move this light along the Z-axis, and then, move it up on the Y-axis.

Now here I just this position this a little further back and I want you to notice that we can see the light here on the front part of the cube. But look at what's going on here in the back. If I render this, notice the light moves right through that object. So that's the first technical limitation I want you to be aware of. Lights do not bounce, even if we had a reflective material it wouldn't bounce off that material. It's just going to shoot right through. So, how do we create something interesting with dimension if the light isn't going to respect the object that's in the scene? Well, we can still make adjustments, so let's go ahead and just click on the light, and go down under the General tab, and we want to enable shadows.

Now, there are multiple kinds of shadows we can use, but for this example, let's just choose shadow map soft. Once we do that, it may look like nothing is happening here in the scene, but if we actually render, you can see now the light isn't passing through my object. It's respecting that object as an object. Now, that's another technical imitation that you need to be aware of. When you are posing your lights and moving them around the scene, if you need an actual dynamic update as to what's going on, you want to press Option+R or Alt+R on Windows to open the interactive render region.

With the render region open, you can click on the edges to resize and choose exactly what part of the scene you'd like to analyze. On the right side here, you should see an arrow. It may be here on the right in the middle. Just click and drag that up to create a high resolution preview of your scene. Now, I don't want to work with that right now so I'll press Option+R or Alt+R on Windows to get rid of it. The important thing to remember, don't pay attention to lighting in the edit window, always render what it is you're looking at. Now there are a ton of options for spotlights, but for now I just want to disable this light.

So if we go to the objects manager I can just click on the check mark to disable that light. I want to use a much softer light to create a soft diffuse light thought my scene. So let's go back up under our light object, click and hold and add an Area Light. Notice if we render the scene, the area light actually is emitting light, it emits light along the Z-axis. But notice we have this really dark line here. Well let's go ahead and click on that light and move it off to the side here. Then we'll go ahead and move it up in the scene.

And you can see the light is a box, which is great, but that black line is created because it throws light exactly along the Z-axis, and it throws it at 180 degrees on both sides, so it throws it in a positive and negative fashion. If we need to make adjustments to that, we can under the details area of this light. So let's go to details and the only adjustment I want to make right now is all the way to the bottom. Let's enable Z direction only.

Once we do that, now the light's only going along the positive of the Z-axis. Now let's move this light over to the side, and I'm just going to switch to four-up view so I can better see what's going on here. We'll position it over on the side and up on the cube, and then we can just adjust its rotation. So I'll just point it more towards the cube and tilt it down towards the cube. And then if we render our scene here, you can see, okay we've got much more dimensionality and a beautiful soft diffused light, but nothing is grounded for our object.

So we need to select the light and go to its general settings and enable shadows. So again let's just choose shadow map soft. If we render the scene, now you can see I've created a much more dramatic scene with this light that's actually coming across my object. Now notice we haven't used any materials and materials obviously change the appearance of an object. But, if you want to change your scene and add drama and dimension, definitely stop using the default lights, use the new lights and light your scene accordingly.