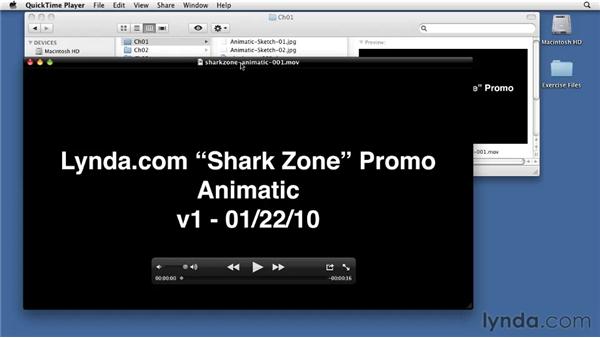 The graphic animation process is very complex. The best way to approach this really difficult task is to break the project down into stages. The major stages are sketching and concept development, style frames and design, animatic, which gives you the timing for the overall animation and the cameramatic, which gives you the very rough animation, and then the final piece. Now, I've got all examples of all these so I am going to go out to the Finder. The animatic-Sketch.jpg files here in the Chapter 1 folder. These are covered in the previous movie and I am just going to open them up with preview and just go over them real quick again.

Now that I know I have that stuff, I'm going to create something called a style frame or storyboard and that style frame looks like this. These storyboards are representative now of what the final piece is going to look like. Storyboards can be loose or they can be very tight. A lot of it depends on how much time you have and what your skills are as an artist but also what the client expects to see too. These storyboards are very tight, nearly identical to what the finished piece looks like. But they give me an excellent idea of what my final animation is going to be.

So, I've got basically a frame for all the major points in the animation. So, I start off with the intro type "After 400 million years." "They're still the scariest thing in the ocean." So, there is my school of sharks and I know I am going to have those two pieces a type on screen. Then I have some frames representing the thrashing shark transition and then we are going to cut to the Shark Zone hero frame. This is the Shark Zone type with the shark swimming out from behind it. That shark is going to come to screen over the course of a few frames. Then we get to our thrashing shark transition number two.

That takes us to the end page where the Adventure Channel logo animates on the screen. Then a shark's going to swim through the frame revealing the tagline If it's out there, it's on here. So, these are the style frames that tell me what my piece is going to look like. Once, I've done that I can really begin to animate things. But I don't animate anything until I know how long things are going to take and that's where the animatic comes in. Now, the animatic looks like this. What you do to create the animatic is to take the sketches that you did by analyzing the script and sketching on paper and scanning them into the computer.

You line them up inside of After Effects or Final Cut, any kind of editing program. If your script has voiceover then you read a scratch voiceover track and you use that as your guide for placing the images in the scene. The purpose of the animatic is just to show you when things are happening. It's not intended to look good. It really only shows you when things are happening and it's a very basic part of the process. But it's crucial for understanding when things move in the animation and this is what it looks like. (Male speaker: After 400 million years, they're still the scariest thing in the ocean.) (Male speaker: Get a little closer, if you dare. Shark Zone, all week long on the Adventure Channel.) (Male speaker: If it's out there, it's on here.) So, you can see that it's just the sketches but they're timed out to the voiceover and it really gives you an idea for what the final piece is going to feel like when it is finished.

It's nothing at all like what it's going to look like but it's what it's going to feel like. That's very important differentiation to make. You can see that my timing is pretty consistent with the script and I can see my transition links. It really gives me a feel for when things are going to happen. I have timecode here in the frames. On the right-hand side I have a overall timecode and on the left-hand side I have a shot timecode that tells me how long my shots are. That's a crucial step because instead of focusing on trying to figure out how long the shots are, now I can focus on what happens inside those shots one at a time.

So, once you've got the animatic done then you move on to something called a cameramatic. The cameramatic is the next step in the process after you've created the animatic. It's not at all rendered but it does have animation in it. Sometimes, the animation can be very finalized and sometimes it can be very, very rough. This cameramatic has a little bit of closer to finished animation. It's not quite done. (Male speaker: After 400 million years they're still the scariest thing in the ocean.) (Male speaker: Get a little closer if you dare. Shark Zone, all week long on the Adventure channel.) (Male speaker: If it's out there, it's on here.) So, you can see that it's one step closer to the process.

I have sharks in the frame now and those sharks are swimming. I have rough type. I have the transition in place. So, I understand now when things are happening but I also understand what's happening within each shot. That's really the purpose of the cameramatic. Once, you have those shots timed out, you have the animation done, then you can move on to lighting and rendering with confidence. The last thing that you want have to do is have created all this animation and lid it and render it, then have the client come back to you with new drastic changes that make you go all the way back to square one. So, it's really crucial to work in stages like this so that you don't get sideswiped with a big change or a request from the client.

So, now once I've got the cameramatic done, I move on the final lighting and rendering and I get a finished piece that looks like this. What you are about to see has the final voice-over and finished mix as well. So it really sounds and looks like the actual product that goes out on the air. (Male speaker: After 400 million years they're still the scariest thing in the ocean.) (Male speaker: Get a little closer if you dare.) (Male speaker: Shark Zone on the Adventure Channel.) (Male speaker: If it's out there, it's on here.) So, now you can see that the graphic animation process can be very intimidating.

But if you break it down into those stages, the concept development, the animatic, the cameramatic, the file animation, you really are able to take something that's very complex and make it very achievable.