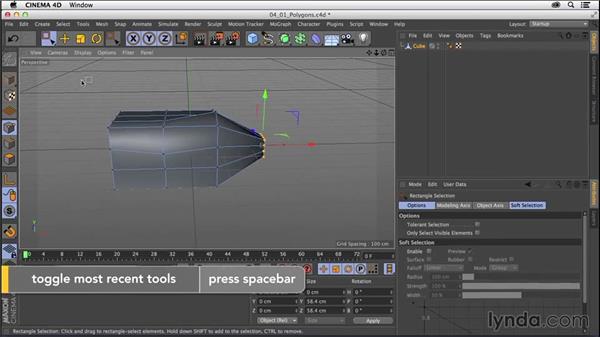 Polygon objects are created with points, edges and faces. You need at least three points to create one polygon face but they can be created with more points. Now, just so we can get a working example of how to manipulate polygons. We're going to go ahead and create kind of a low polygon model for clouds. And to do that, we'll just go ahead and start with a cube primitive. So, let's go up and just add a cube primitive to the scene. And with the cube selected, let's go head and change some of its properties so we can kind of manipulate the situation. Let's move orbit around in the scene here. And I just want to hover over the orange box to increase the size of our polygon on the X.

Now, it's not a polygon object just yet because it's a cube primitive. So before we actually convert this, we should go to the Display options, and go from Gouraud Shading to Gouraud Shading Lines. This way we'll be able to see the number of divisions that will be present within the polygon when we actually go to convert our primitive object. So before we actually change our cube I want to add a little bit more geometry to the scene so we have something to work with because right now if were to convert this we would only have edges right along the edges of our box. So let's increase the number of segments on the x as well as the y. And the Z. So, if we orbit around here, you should be able to see that there are nine faces on each individual side. So now we're ready to actually convert this. And I know it doesn't actually look like a cloud right now, but like I said it'll be kind of a low poly version. So it's going to look kind of graphic. Okay. So to convert, you can just come over to the upper left corner and use the same button we've been using all the time or you can go ahead and press C on your keyboard to convert.

Now we know it's converted because we get the polygon icon that's up here. Now when your working with polygons one of the most important things is to not to have over lapping polygons. And you can do that really easily by accidentally moving points too far in one direction or another. Now, for our example here, what I want to do is grab each of these different points and push and pull them around so we have kind of a random looking shape. So we're going to to switch to point mode. And we can do that by coming over here to the left, but now we're actually going to start getting into some of the keyboard shortcuts.

So go ahead and press the V key on your keyboard and this will bring up a contextual menu. And it's very easy to just swipe up. And then you'll get the menu to easily switch to points. So now when we're in point mode, notice, the move tool is automatically selected. So, I could just click on one of these points. And then, move it out. And this, highlight, is caused by the material and we'll deal with that in a little bit. But notice with the move tool you just click once and then move it, which I know we've covered before. So, let's look at some of the different selection tools. Rather than going back up to our selection tool, again just press the V key and go over to select. One of the things I like to do is use two different selection tools and kind of bounce back and forth between the two.

So, we'll start with a rectangle selection. Under rectangle selection I want you to go over to its options in the Attributes panel and deselect only select visible elements. This way when I click and draw a box around this side of my cloud. I know that I selected all of these points regardless of whether or not I could see them. Now the reason I'm editing in Point Mode, is the fact that it's easier to actually control how the geometry distorts as we're working with this. So, I'm going to go ahead and scale this, so the scale shortcut is T, you can just come up and grab the Scale tool or.

Press V and if you go under tools you can choose the scale tool. So let's just click and drag to scale this down because I want the ends of the cloud to kind of be smaller than the center of it. So let's do the same thing on the other side. And to quickly switch back to our selection tool you can just press the Spacebar. I'm going to click and drag to draw selection around all these other points. Now, if you want to be safe, you can switch to four up view. And, that way you can make sure you see exactly what it is that you're doing. So, press the Spacebar again, since I just had the scale tool selected. And, we'll scale this side down. And, just so it's a little different, let's go ahead and grab the move tool. You can press E, or, again, use the V key, to go to your tools, and grab the move tool.

So this way I know when I grab this tool, I'm not accidentally going to grab another point on the other side of my geometry. It's only the points that I can see. So what I want you to do is just click on different points and just move them up and down and around. To kind of create some unique geometry. Now notice as I'm dragging, what I'm not doing is dragging the geometry to a place where if I drag down here, see where these are all intersecting? If I zoom in here you can see that. That's a horribly bad thing. You don't necessarily want to do these when you're modeling so I'll just undo that. It's okay to distort where these points are because I'm trying to create a jagged shape. But I don't want the polygons to ever overlap. Which is what happens when these points cross here. So, there we go. Let's go ahead and just make this a little bit more random in its shape.

We'll click on some of these edge points. Obviously. Choose your own points and your own style as you're making adjustments. The big thing, just don't leave uniform points. because clouds aren't very uniform, so why should our little jagged graphic representation of clouds be uniform? And you can orbit around. If you ever get lost, don't worry, because you can easily just look at the little compass here in the corner and see where you are. Okay, now I can go ahead and render this. And it looks, a little bit like a graphic representation of a cloud. So, if I want to have more than one cloud, I could go ahead and just duplicate this, so I'll hold down Ctrl+Drag on the cube, and I'll move this over.

But notice, I'm still in point mode. So, let's go ahead and press the V key. Go to Tools and Modes. And switch back to Model Mode. Now we can just move that duplicate copy, and press R for rotation. kind of rotate it around. Let's rotate this one, kind of sideways. There we go. And then you can see we've these kind of funky cloud shapes. Now I'm just going to kind of reposition these in the scene. So they're a little further up. And we'll orbit back around. And if you are lost, we can go to View and then just Frame Default. There we go. Zoom out. So, there are our rough polygon looking clouds. If you want them to look more graphic in their appearance, definitely go ahead and click on the material Phong Tag here and change the phong angle down to something around 40. That way when it's trying to smooth out the material on the geometry, it doesn't really smooth it very much. And that's much more of a graphic look. And we'll continue stylizing this when we get into the materials channel.

But for now, I hope you can see, when you are working with polygons, the most important thing is to make sure that your polygon faces are not overlapping. And then, obviously, enjoy switching between the move tool and the selection tool and the different modes with the V key.