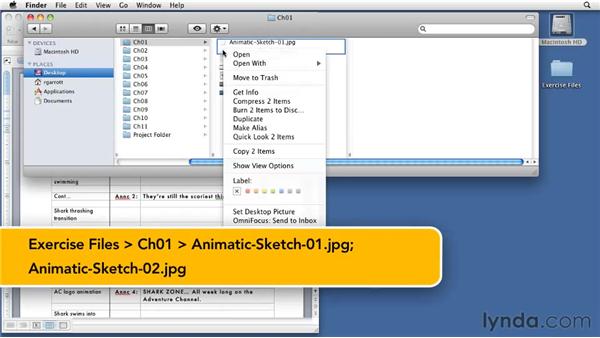 A creative brief shows you the guidelines for creating a project. But once you have those guidelines, the next step in the process is usually having a meeting with the something called a producer. A producer in network world is the person that's responsible for creating the promotions that you'll be showing on air. Typically, a producer will sit down with an idea and say, "I have an idea for a promo about Shark Week, and I'd really like to see a school of sharks swimming on screen, and have those sharks attack the camera." They'll describe all these sequence of events.

Then they'll say, "I have a script that goes along with that," and then they'll show you the script. A script looks a lot like this. It's a Microsoft Word document. Let's back out a little bit. I'm going to change it to Page Width, so that I can see most of the page here. This is a very typical format, but every network will have a slightly different style to it, but they all have one thing in common. There are two columns. On the left side, there is a Video column. On the right side, there is an Audio column and that Video column shows you very loose description of the kinds of things that they'd like to see on the screen.

The right-hand side shows you what the voiceover artist would be saying at that moment in time on the screen. Now your job as a designer is to take this script and translate it into a visual. Now that should almost always start on paper. Pencil and paper is by far the best way to begin the creative process. It eliminates all the distractions of software, and buttons, and file saving, and everything else and it really gets you back to square one. So for this script, what I did was I sat down and created a series of sketches. I'm going to open those up in Preview.

Right here on the screen, I want to bring these over to the right, so I can see the sketch and the script side-by-side. So what I did was I looked at the script and worked my way through it. So in the first scene of Slow push in on a school of sharks swimming, and "After 400 million years?" is what the voiceover artist will be saying. The sketches don't have to be good. As you can see by my sketches, I'm a terrible sketch artist, but they communicate the idea. So I have a few sharks swimming on screen. I have the words "After 400 million years?" scribbled out in the center.

So that gives me an indication that I'm going to create a school of sharks and I'm going to have type on the screen. That's really all I care about. What the type looks like I haven't figured out yet. I only know that I'm going to have to have type on the screen. And then I work my way through the script. You can see I started off an image here, and didn't like what I was going. I just kind of crossed it out. But then the next image is they're still the scariest thing in the ocean. So there is my sharks still swimming. I'm just going to dissolve between this type. Now I'm starting to formulate what the format of the promo is. And then there is going to be a really quick cut thrashing transition. So that's going to be a shark really closer to the screen and that's what these two sketches represent.

And then we're going to show the Shark Zone type hero screen with shark swimming towards the camera. That's what this is. I've created the series of three sketches that show me the shark swimming towards the camera with the Shark Zone type in the background. Then on the next page is the branding for the network. The Adventure Channel logo, and a reveal on the type. So you can see the Sketch process really helps you to formulate the basic ideas for your piece. It's a crucial step in the animation process. It's one you really should never skip over.