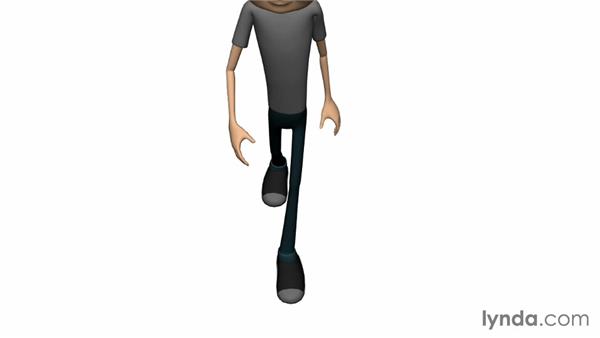 We're going to start off by looking at a character walk cycle. Now, before we do that, let's just go ahead and do a quick refresh on how characters walk. We have a simple character here. And if I press play you can see that he's walking. Basically, walking is putting one foot in front of the other, but it's also about weight balance and weight transfer. Now some people call walking controlled falling because what happens is that there's a point that's about right here.

Where the character starts to move out of balance and he catches himself on the other foot. Now typically when we start a walk, we start with this extended position where the feet are furthest apart. Then we move into what's called a cushion position, and then one foot passes the other at the passing position. And then he pushes himself out of balance and catches himself again for an extended position. Now what is really important about a walk is that you understand how the character is moving his weight around.

I'm going to take a look at this character from the side. Now in this extended position we basically have both feet on the ground and so the weight is basically, pretty much balanced between this foot and that foot. Now what happens is that as the character starts to place his weight on that downward foot, the hips will start to move down. So basically you can see he's, bringing his weight down and gravity is taking over. Now there's a point here here that foot is going to fully catch the character, and its going to start pushing up.

It starts to accept the weight of the body, the body moves down, and then the foot starts to push up through the leg, to get another extended position. And at this point we've transferred the weight to the other foot. Now in addition to this, we get a lot of motion in the hips and the spine. So let's take a look at that. I'm going to go ahead and focus a little bit on the hips here. So when I play this, you can see how the hips are moving back and forth.

Let's take a closer look at exactly how. They're moving, so what happens here is that the hips are going to follow the feet. So, when the right foot is back, the right hip is also back and you can see how the hip rotates forward with the foot. And then as the weight transfers, you can see how the opposite hip moves forward as well. Now this rotation in the hip also causes a complementary rotation in the spine.

So if we go back to the beginning, you'll see that the spine is basically twisting so that the shoulder here is forward when the hip is back. So in other words the shoulders mirror, the hips. So when we scrub this, you can see how, the opposite shoulder rotates forward. And then when the other foot moves forward, it's opposite shoulder also moves forward. So if we press Play on that, you can see how each one of these, are basically just moving in opposition.

In addition to this, we also have some motion that happens from the front of the character. So, if you take a look at him from the front, you'll see that as he moves forward, this leg here, is going to basically. Lift up and throw the character out of balance. And so you're going to have another situation here. What happens is that, that weight on the foot basically pulls the hips out of center. So what we're getting here is we're getting a opposite.

So, when the character has his foot off the ground, we're going to have a little bit of an out of balance situation. So what we want to do is we want to move the hip, over so when this foot is free it's pulling down on the character. So the character's weight needs to go this way, over the planted foot, in order to maintain balance. Now when that happens, basically what it does is it forces the hips to move. Basically left and right as the character walks.

So, now that we understand a little bit more about the walk, let's just go ahead and take one more quick look at it. So, now let's go ahead and move on to actually creating a walk cycle.