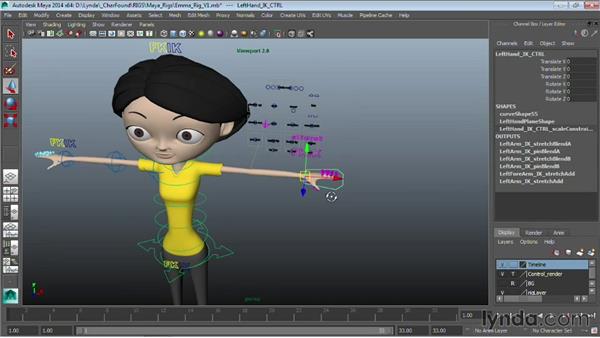 If you download the exercise files for this course, you'll receive a couple of rigs. For my users, we'll have two rigs. We have this rig here, called Walter. And then we have an identical rig on a different character and her name is Emma. Now, both the rigs are identical. And we've created these rigs so that you can see everything in the viewport so there's no additional interfaces. So, this makes it very good for teaching the course in the way that we're going to teach it.

Now, these are very robust rigs and we can do some great animation with them. So, let's take a look at the Emma rig and I can show you how these work. Now, at the very bottom we have a master control which is called the supermover and this just allows you to move the entire rig. Now, the feet are, by default, set up for inverse kinematics. So, if I zoom into the feet you'll see we have some controls here. We have an outer control here which moves the foot, so if I want I can move that foot and use inverse kinematics if I want.

Now, if I zoom in little bit more here, you can see inside of this outer ring we have a control to move the toe. In the back you can see here we've got a control to move the foot and these are rotational and then if you want to rock the foot back and forth we also have one for that. Now, next to each foot you'll see that we have an FKIK control for the foot. Now, these controls work very simply, all you have to do is select it, and go into your Move tool, and then if you move it down or up you can see how it switches from FK to IK.

So notice how the controls on the foot change, this is the FK controls. This is the IK control, so in FK, which is forward kinematics, we can rotate all the joints and this is how we would position them. So if you don't need to lock her feet, you can just rotate these joints however you want. Now, if you want go to IK, all you have to do is move up. And when you do that, notice how the IK is the one that's highlighted in yellow. So when I move down, that's FK.

When I move up, it's IK. Now, we also have a stretch control, so we can actually use stretch on IK joints. So, if I turn that on and grab the foot, you can see that if I move beyond the IK limit, the joint stretches, which is kind of fun. And you can also stretch from the hips if you want to. You can stretch that foot, as well. Again, just to move it, you just drop that down. And when any joint is in IK Mode, you also have directional controls.

In this case, for the knees. So if I bend the knees here, you can see how these basically are what the knee is pointing at. Now, let's move up the body. We do have our hip controls here, and these allow you to move the hips. Below that there is kind of an adjustment control here, and that's this little ring outside of here. Which allows you to basically rotate the hips and keep them in place positionally. Now, as you move up the spine, you'll see we have spine controls here which allow us to rotate the character.

One of the nice things about these is that you can actually move these to stretch the character at the torso, which is kind of fun. Then the arms. We've got our shoulder controls here. By default the arms are set to forward kinematics. Behind the shoulders we also have little mover controls here that allow us to position the shoulders up or down. So if you want to shrug the shoulders you would select these. Now, the hands are very similar to the feet in that they have an FKIK control.

So if I move this up, I get IK, and I can also turn on stretch for this. So, if I want to select the stretch control, move that up, you can just grab this here and move the hand. And of course, you can also rotate that to position the hand as well. Now, if we want, we can also turn that off and put it back to forward kinematics. Now, the hands. Basically the hands are very simple, we have these little, what I call pins, that you can select.

And these are, these little controls here allow you to rotate the hand. If you want you can also move those if you want to push the fingers closer together or further apart. Now, the head and the face, we have a control here for the head and if you want you can turn on IK for the head. Typically, that would be if you wanted her to stand her on her head or lock her head to a position. But the most important one is the facial control. Now, you can get to the facial controls here. We also have a camera set up called FaceCam which basically is locked to the face no matter what.

I'm just going to go back to my perspective cam here. So, let me just kind of run you through these controls. This one here is jaw shift. And basically, it moves the jaw left and right, forward and back. These two here control the lip. So, we can control the upper lip here and the lower lip. I tend to use these a lot in dialog. We also can roll the lip. So if you want to do like an f shape or tuck the lip underneath, we can do that. We also have tongue controls here. This lifts the tongue up and down.

We also have a control that sticks the tongue out, and that usually only works if the mouth is open and you can actually see the tongue. Over here, on the left, we have cheeks, so you can actually blow out her cheeks if you want. If you want to puff up her cheeks, or make her cheeks hallow you can certainly do that. And we can also make her smile, so we can actually bring up her cheeks into her eyes. This is probably one of the more important controls. This is our sync control. This is going to be used a lot in lip sync, but it's not exclusively for lip sync.

You may have to use other controls to do it. So, if you move the control up or down, this is up, it basically clenches the mouth together and bares the teeth. Down, it opens the mouth. If you go left it gives you an O sound, if you go right it widens the mouth for more of an E sounds. So with any combination of these you can get a, quite a bit of variation in the mouth position here. Now, over here on the channel box, you can certainly zero out any of these parameters to set it back to neutral.

Now, we have the emotion slider, and this is just smile and frown. And then we also have a mouth sift which allows her to, you know, basically move the mouth and add a little bit more variation in the facial pose. Now the rest of the controls affect the upper face. We have this sneer control which is basically just the flares the nostrils. Now, combined with the upper lip, you could certainly get a pretty good sneer right there. So you're sneering the lip and sneering the nose and the nostrils. We also have the lid controls here.

Very simple. One for each lid, up and down and on both sides. And then we also have eyebrows. So we can move your eyebrows up or down, so each one of these we have, this one moves each corner here, so we can move the corner up or the middle up or down. And then we can control the inside edge up down, but we can also tuck that in or push that out, if we need. Now, finally the eyes. This basically controls the eyes, left and right, up and down.

And you can see you can get a pretty good sense of motion for that. Now, if you want to cross the eyes, all you have to do is rotate this. So if you rotate this along z, you can cross the eyes or push them out. And these controls are here. If you want to zero that out, that just goes ahead and puts it, again, back to neutral. So, the Walter rig is identical to this rig, so you'll have both rigs available to you if you want to use those to follow along with the exercise or create your own animations.