Cycling the feet in a walk 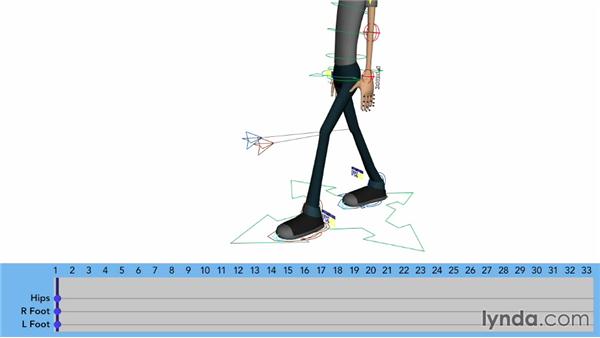 Join George Maestri for an in-depth discussion in this video Cycling the feet in a walk, part of Character Animation: Locomotion.

Now let's go ahead an animate a walk cycle. Now this is a little bit different than a standard walk in that the feet are sliding in place. So in other words we need to make the feet slide around the center of the character. So for this walk we're going to do this at 16 frames per step for a total of 32 frames. And I'm going to go ahead and start off at frame one. Now, we're going to start off with the extended pose. And that's where the character's feet are at maximum extension.

So, I'm going to move it back to about here. And again, set a key. So now I've got the feet basically in place. But as you can see the hips aren't really aligning with the feet. The, basically, the heels are lifting off the ground because the hips are too high. We also need to rotate the hips into place because remember when the left foot is forward. The left hip is also forward. So, I'm going to go ahead and drop these hips down right about there, and then I'm going to go ahead and rotate them forward just a bit.

Something about like that. Now when I, rotate those hips forward, you'll see that this back leg is a little bit bent. So one thing I want to do is go ahead maybe move the hips forward just a little bit so i get a little bit more extension on that back leg. And this will just give me a stronger pose. Now once I have all of that in place, I can set a key for the hips, and then we have the basics of this pose. Obviously we are going to go over this a few more times, but let's just get the feet moving this first pass.

Now remember we've got 16 frames per step so I'm going to move forward 16 frames, halfway through the cycle. And now let's go ahead and just mirror this pose. So let's go ahead and start with the left foot. I'm going to select this and move it back so that it is even. With the right foot and we can just go ahead and set a key for that, now when I've got this, now you can see how that foot is basically just sliding along the ground.

Now, we still have to do the hips here. So I'm going to go ahead and, and select the hips. And I'm just going to go ahead and rotate those so that the orientation is opposite of what we had before. And let's go ahead and set a key for that. So now, you can see we've got basically the feet changing places, character's kind of walking in space. And all we have to do now is just finish off the cycle. Now if we wanted to we could copy keys.

So I could select the left foot, so if I basically copied and pasted the keys I can have that foot cycle. You can do the same for the right foot. going to go ahead and just paste in a key. So now, we've got the keys basically moving in place. And then all I have to do, again, is copy and paste the hips. Or if I wanted to, I could just rotate those to exactly where we want, and set a key. So now, we should have the basics of the lower body in place.

So obviously, this is just the bare bones of the walk. We'll fill in all of our details later.

Video: Cycling the feet in a walk