Creating a reflective floor for the underwater scene 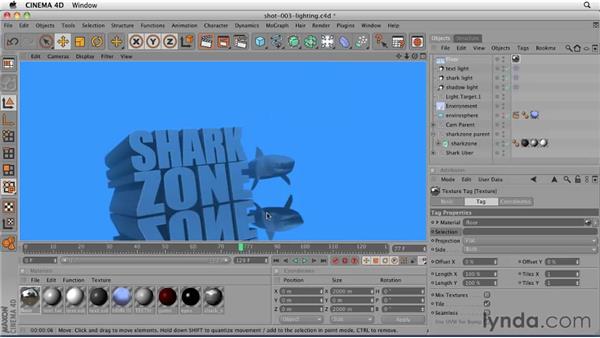 I'm starting off with the shot-003- lighting file that was created in the previous three movies. If you are following along at home and would like to get to this point, you will need to complete the first three movies, in order to have his progress so far. Right now, our scene looks pretty good. But the type and shark feel like they are floating somewhere. This shot really needs to feel more grounded, as if we were at the bottom of the ocean. But it should still feel like a graphical environment, and not a real ocean floor. In this video, we'll add a reflective floor element to the scene to add a visual foundation for the type and the shark. In order to create a floor object, I'm going to go to the Scene Elements and add a floor to the scene.

The Floor object is a special type of primitive. It looks like a very small plane, but it actually extends out to infinity in all directions. It only does that at the time of render. So when I render this now, Command+R, you're going to see I now have a natural floor in my scene, and my shark is casting a shadow on to it. So is my type element. That really adds a foundation to our scene that missing before. The shark and the type no longer feel like they're just floating in space. I want to add a little bit of spice to this by adding a reflection to the floor. That's going to add a quite a bit of style to the scene that isn't there yet.

Then when I render, Command+R, you're going to see a very different scene than we had before. You can see our shark is reflected, and the Shark Zone type is reflected in the scene. It really changes the character of the entire shot. I don't really want to see the Shark Zone shark and the reflection at 100% intensity. I'm going to be dialing that up and down inside of After Effects in order to control that. It's a much better to do that sort of thing inside of After Effects. One thing I do want to do here in CINEMA 4D though is to add a little bit of blurriness to the reflection, so that it isn't as sharp.

That's going to also add a nice style to the image that would be a little more difficult to get in After Effects. So in order to do that, I'm going to go the floor material. Under the Reflection property is a feature called Blurriness. Blurriness will blur the reflection that shows up in the surface of the object. So if I adjust that Blurriness, I'm going to change it to about 10%. Now you have to be very careful with this Blurriness option. The reason is that it adds a lot of render time to your scene. So I'm going to go to 10%. The higher the Blurriness factor, the higher the render time.

So when I render, Command+R, you're going to see my render is going to take quite a bit longer than it did before. But when it finishes rendering, my shark and Shark Zone are very, very diffused in the reflection. Now that's probably a little too diffused. So let's dial that back down again. That's actually going to save some render time. So let's go back to the Blurriness option, and change that from 10% to 5%. I'll do another test render, and see how that looks. There we go.

So now, we have a nice foundation for our scene. Our shark is showing up in the reflection. Our Shark Zone type is showing up in the reflection. But they're very diffused. You can see that the diffusion extends downward into the scene. So here next to the Shark Zone type it actually is pretty crisp. Then it gets more diffused the farther the objects are away from the reflection source. So it's a great way to add some visual style to your scene. But be very careful, because it does add render time. The lighting for the scene and the shading for scene is now complete. The great part is we don't need to do all that over again for the other shots.

We can use this shot as the foundation for the starting point of each of our other shots.

Video: Creating a reflective floor for the underwater scene