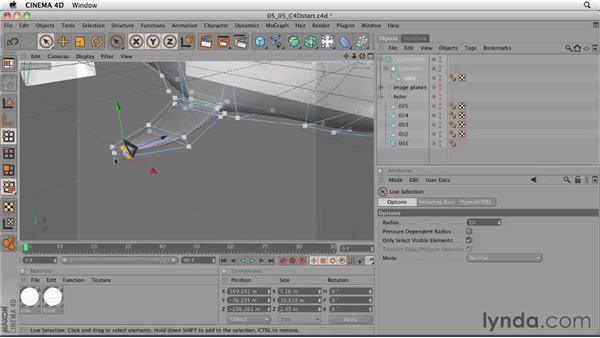 A shark has a lot of fins. We typically think of the one on a top that sticks out of the water and scares beachgoers, but they are really a lot more. We want to create them in a specific order so we can minimize how much backtracking and fixing we need to do on our model. In this first part of the fins we are going to create the pectoral and the pelvic fins, which run along in the size of that shark, and we are doing this because we already have the Symmetry object in place and that's going to make making those sets of fins really easy. Let's start off with the pectoral fin. I've select my cube object. Now, I'm about to make a drastic change. So let's Ctrl+Drag a copy of that down into the hider and call that 005.

And let's hide it from view and let's fix that so we don't have to worry about that anymore. I'm going to make both dots gray. On my original cube object here, let's switch to the side view and you can see that I already have a nice base. The pectoral fins come right out of this polygon here. So that's a perfect place to start. So let's switch back to the Perspective view. Move into polygon mode and then use our Selection tool and grab this as polygon right here. And actually, I grabbed the wrong one.

Let's make sure that I have the right one selected. I will grab this polygon in the Orthographic view and move back to the Perspective view. Now, we're going to use the same kind of technique that we did for the eyes, except this time instead of extruding inward to create an indentation we're going to extrude outward. But first we need to create some extra polygons for us to work with. So we use the Extrude Inner tool to drag and drag to the left here and then create an inset of polygons. Now, I can use the scale tool. T on the keyboard, and squish that down, because the fin is really thin on one axis.

Let's move that polygon around and bring it down to right about there. Now, I can use the Extrude tool. D on the keyboard or you can right- click and grab Extrude and drag to the right to extrude outward. Now I need a little more detail, but this is going to for now. I'm going to just drag it out here. A lot of times what I do when I'm extruding I'd like to do one long extrusion and then use the Knife tool to make some cuts to shape things up. So let's do that. So I've got one long extrusion and now I can use my Knife tool, K on the keyboard, and make a cut up here near the top and you see how it tightens up the fin.

Then I'll make another cut down here in that fin, as you can see from the drawing. Let's switch to the side view. It has sort of a leading edge and a trailing edge that has a little bump in it up here. So we want to make that bump. So let's switch back to the point mode and then grab just these two points. I used the Spacebar to grab the Selection tool and let's take these points here and move them on the Z-axis. That's going to shape that up. Then we'll take these two points here and move them this way on the Z-axis.

Now, we don't want our fins sticking out to the side like that. It really kind of dangles down and they use that for steering. So if I grab these first groups of points, I want to grab all the points that are associated with the fin. So I'll go to the Selection menu and use the Grow Selection command. When I execute that, it grabs the next set of points up. I'll do that a couple of more times to get all the points for the fins. Selection > Grow Selection, Selection > Grow Selection, and now I have all those points for the fin and I can just move them out just a bit.

Then I can rotate them down into position and then tuck that fin right into this side. You can see now I've got a nice pectoral fin. That really looks pretty good. So now we can move onto the second set of pectoral fins. And if I look at the side view of the shark, in the side view its actually looks like a single fin, but really it's two fins that are in this region.

So I'm going to grab the polygons associated with that. So let's switch back to the side view and go to Polygon mode. Make sure you're using the Selection tool and grab just that polygon right there. That's the one I want to use as the basis for my second pectoral fin. If I right-click and do another Extrude Inner, you can extrude in to make that fin and then to another Extrude outward by dragging it to the right to make that fin.

As you can see, it's starts off as a little bump. Then I can do another extrusion to get the fin a little bit longer and then I can just reshape it using the points. So let's start off by scaling that polygon. I will hit T on the keyboard to get the Scale tool and just scale that polygon. You know what, rather than use the Scale tool, I think it might be easier actually to just to move the points around. So let's switch to Point mode, grab a Selection tool, and then grab these two points right here. I'm going to move them on the Z-axis to kind of make that fin a lot thinner.

Then move this one up like this. You see that how the fin gets a little bit thinner each time I do that. I am going to move those guys together. Now I want to just create that nice little shark-like indentation here in the fins. So I will grab these two points and I am going to move them back a little bit. I think I need to do one more extrusion. Grab these guys and move them up just a bit. I'm going to do one more extrusion. Let's tighten this up and so I can get that nice this little point right here on the leading edge.

So I will switch back to Polygon mode and then right-click and grab my Extrude tool and do one more extrusion outward. Then I'm going to scale this polygon by switching to Point mode. Remember, whenever you're moving points you also moving the polygons. So as I move these points around I can switch up the shape of that polygon and just make it nice and smooth. So move those guys together there and adjust the leading edge of this fin.

I think it's going to just about done. There we go! Let's take a quick rendering, Command+R, and we can see that we've got a great looking second pectoral fin. So the Symmetry object is a really important tool for modeling and it makes things like these fins and the symmetrical elements on the shark object really easy to create.