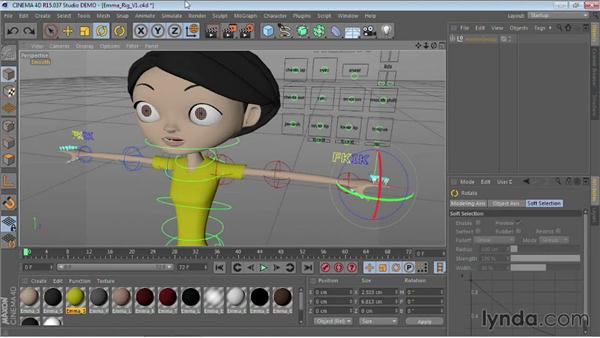 If you're a Cinema 4D user, we're supplying two rigs for this course. Now these are just rigs that you can use to create your own animations. Or, if you want, you can follow along with what we are doing. So, these rigs are basically engineered to be as close to the other rigs that we're using as possible so that way you have the same controls. So, these might not be a typical cinema 4D rig but they match the course. And these are very capable rigs that you can use for lots of different types of animation.

So, let's go ahead and run through some of the basics of the rig. If we select this big control here, that's basically just the master mover control. So we can actually move the character around. We have controls for the feet here. If you zoom in here, you'll see we have a control here for the foot and this basically is your foot position. By default, the foot is in inverse kinematics. Now, we have inverse and forward kinematics for the feet. So, if I select this control here, this FKIK control and drop it down.

Notice how the controls change. When the controls are like this, it's forward kinematics. And this is true for all different joints of the character. And this allows you to rotate the joints. If you select this and move it into IK mode, you'll notice that we get some additional foot controls. We also get a knee control, so if I basically move the character down, you can control the direction of the knee. We also have similar controls for the elbows on the character as well.

Now, the feet themselves have some interesting controls. Here we've got the master manipulator here for the foot. We also have a control inside here. That allows you to tap the toe here. And in the back, we have another control here which allows you to lift the heel. And then one right here which allows you to rock that foot back and forth. So again, these are just ways to control the feet. Now, if we move up the body here, to the hips, we have a master hip manipulator here.

And you can use that to rotate or you can use it to translate the hips. Now, if you have inverse kinematic set up, the feet will stick. Moving further up the spine, we have actual spine controls here. Now, we can use these to rotate the character at the spine. If we want we can also translate these so that the character can stretch or squash at the spine, which is kind of fun. The arms work pretty much the same as the legs. We have these controls here for forward kinematics.

And again, you can rotate those however you want. We also have a control here which basically switches it from inverse to forward kinematics. And those work pretty much the same as the feet. This is the control for the hand when you use inverse kinematics. So, let's go ahead and set that back. And then zoom into the hands. Each hand has one of these little pins for the joints. And you can use those to rotate the fingers and the thumbs. Now, the head. Very simple, we have a control here for the head, very intuitive.

You can simply rotate the head. If you want, you can also use this to translate the head, so if you want, you can stretch the neck, or move the neck left and right, which is kind of fun. If you need to lock the position of the head, we also have FKIK controls for that. Now, zooming into the face, we've got a number of face controls here. We've got a jaw shift control, which allows you to move the jaw around left and right. We have an upper lip control.

We have a lower lip control. And again, that just brings the lower lip. This is great for dialogue and lip sync. We also have roll control so you can actually roll the top lip up or down. We have, here, controls for the tongue, to move the tongue up and down, and this one moves it in and out. We also have a cheek control which allows us to puff out or suck in the cheeks. Up here we have a cheek up control which basically just pushes those cheeks into the eyes for certain types of poses.

Now, we have the lip sync control here. And this one here called sync. And this allows you to basically do most of your lip sync, not all of it. You may have to use other controls to do some of the phonemes. But, if you move this down, it opens the jaw, move it up, it clenches the teeth. Right, widens the mouth. Left, closes the mouth. So, if you want an oo sound, you can get that around there. Or an e sound, you can do it somewhere around there.

And then these are your a and so on. We also have an emotion control, which basically just smiles or frowns the character. We have a control here, which manipulates the position of the mouth, which can add in getting a nice facial pose. We have some lid controls here. These basically open and close the lids. And then we also have a sneer control. Now, this just works on the nose, so if you want a true sneer, you'd have to kind of work with the upper lip control in conjunction with it to get a really proper sneer.

So you basically can do that. Now, up here we have eyebrow controls. Each one basically just lifts or lowers a certain portion of the eyebrow. So we've got one for the middle, one for the end, and one for the other end. Now the inside corner, you can actually move that up and down a little bit more which is kind of fun. And then finally, we have eye controls. So, we can move the eyes left or right, up or down. Now, the secret for this is, if you want to cross the eyes, you can rotate this along z to widen or narrow the gaze, which is kind of fun.

So if you want to make her cross-eyed or wall-eyed, that's how you would do it. You would basically just rotate that eye control. So, those are some of the basics of Cinema 4D and again there are two rigs. There's this one Emma and another one called Walter. And the rigs are identical. So if you want, you can use these along with the course or you can use them for your own projects as well. Just have a lot of fun with them.