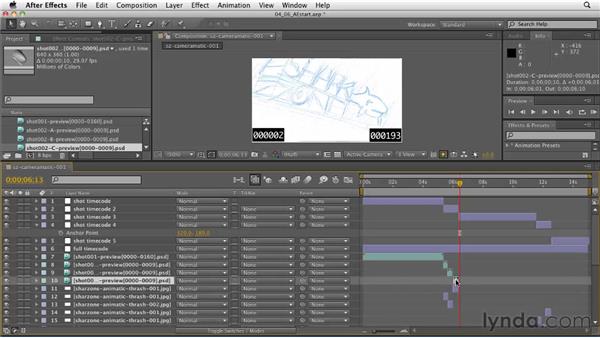 Our cameramatic process is almost complete. We prepared the shot one preview movie and place it into After Effects and behind the scenes I have gone through and completed all the other shots and you can see them here in the project files. shot001 is the one we did previously and then shot002 A, B and C are the shot transition. Shot003 is the hero shot with the logo that says Shark Zone, and shot four is the Adventure Channel logo with the shark swimming by. Now all of these shots were completed using the exact same techniques that we used in shot one, just a different application of those.

The folders that you see beneath the project files here are all of the exported animation sequences. So if you see shot001 preview, that's an image sequence of PSD files for the shot001 and shot002 A, B and C. All of these are just image sequences and I always nest those inside their own folders. That way I wouldn't end up with one single folder with all of the preview images jumbled up together. Let's move back to After Effects and start importing those files. So I'll select my Audio Video folder, and go to the File menu and do an Import file and navigate to my Chapter 4. Now shot001, we've already imported.

Now always make sure that your Photoshop Sequence button is checked. Otherwise we'll only get a single image. We want to have the entire image sequence imported. File > Import and this is going to be 003. File > Import and the very last file will be shot004. There we go. Now that I have all those shots imported, you'll notice the settings on my shot001 file, I have a 29.97, but all these others came in at 30 frames per second.

So I need to change them all. So I am going to select this first movie and right-click on it and go to Interpret Footage > Remember Interpretation and that's going to tell After Effects to take the settings from this file and store them in memory. And then I want to apply those settings to all these other movies. So if I click on the first movie and then hold down the Shift key and click on the last movie and I right-click one more time and go to Interpret Footage > Apply Interpretation, that's going to apply the same settings to all these movies at once. And save me a lot of time.

Now when I click through them you could see that they all are 29.97 all the way through. Now I can begin the process of placing these into my After Effects timeline. I am going to raise this window up just a little bit and make sure that I can actually see all of my files here. So I will start off by placing in the transition and the way the shot transition is done, it's actually three shots all stuck together in rapid succession. You could see in the animatic, we did a thrash 1, thrash1, thrash 2.

You can see it goes there is the first thrash, here is the second thrash, here is the third thrash, all in rapid succession. Now I made separate movies for those, so I can drag those movies in and put them in line in the timeline here. So I am going to drag those in right below my preview shot and then I'll do A, B and C. Now the order of these shots isn't so important right now, because I am going to tweak that in the final animation. The important is that they are there, taking up the space in the timeline. So if I hold the Shift key down, that's going to allow me to snap my movies to end to end and then highlight that one.

It's a little bit tough sometimes when the movies are really short. So sometimes I'll zoom in on the timeline to make sure I am looking at things and I'll zoom in using the Plus key on the keyboard and then I'll butt all these guys up end to end and they should exactly fill the space that I have, which was 30 frames. Hence you can see now there is my transition thrashing, good. Now I can add in the shot003 file, so let's bring shot003 and we drop it right below the transition.

And let's drag that layer all the way over to the right and then butt it up with that previous shot. You can see there it is, the camera drops down into frame and as it does so, the shark swims out from behind it. Whoops. That happen sometimes when you have a really short preview window here and I accidentally jump ahead a little bit. There we go. So the shark swims out from behind it and swims right to camera. Now you notice it looks like the shark is holding a cylinder here. I actually wanted to be able to tell where my dummy shark's mouth was and so I added a cylinder here to indicate the approximate position on the shark's body where the teeth was. So no, my shark is not playing fetch.

It's actually a dummy object that's there on purpose. Now let's get shot004 placed in. Once we play shot004, we're going to then duplicate the thrashing transition and get it into position as well. So let's take shot four and drag that into the sequence down here and I use the Left Bracket key to get my shark to jump to the end there and really what I want it to do, this last shot should butt up with the end of the sequence. If I hold down the Option key and press the End key on the keyboard, that forces my movie to jump right to the end of the timeline.

Now I have another gap here that I need to fill in with this short transition. So I am going to select all three of these shark transition movies and see I have those three layers selected and I am going to duplicate them, Command+D, and then I'll drag them down below that layer, and you saw that black line form there. And I can take these now and move them in time to that opening and as I zoom in with the Plus key, I want to make sure that my movies are all lined up and they don't have any black spaces there, and the things are looking good.

Now in the final animation, I am going to be reversing this sequence so that I don't have the exact same transition. All I am going to do is just simply switch those shark animations around, so that instead of going A, B and C, it's going to go C, B A. I am not going to worry about that here for the cameramatic. I am just going to do that in the final animation. So let's do a quick RAM Preview of our piece and see how everything is fitting together. So I am going to back out the timeline here, click the RAM Preview option, and let that cache all the frames.

So we want to give it plenty of time to be read in the animation. So what I need to do is to adjust some timing and the shots that I am going to need to change, I am going to need to make a change to shot003 and a change to shot004. The cameramatic process is really about flexibility and this is a great example of that. One of the reasons you do the cameramatic is so that you can discover issues like this, and this is a case where I have discovered an issue that's very important from a branding standpoint and I need to go back and fix it.

So in the next movie, we are going to make some adjustments to shot003 and shot004 and then redo our cameramatic with those new shot previews.