Repeating chunks of code with for 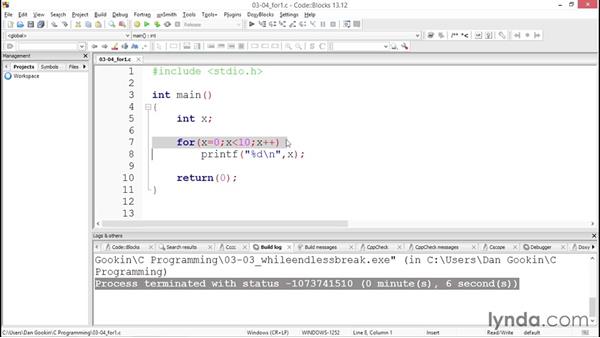 - The for key word is used for creating loops in your C code. Unlike a wild loop, the for loop is set up on a single line, which makes it more cryptic, but it remains a popular and perhaps more traditional type of loop. In this movie, I present the for loop. You'll see how to set up the loop and understand it's parts. A for loop is presented at line seven. The loops statement contains three parts, each separated by a semi-colon. First comes the initialization, this statement is x=0, which is an assignment.

It's made at the start of the loop. Second comes the looping condition. The loop repeats as long as this condition is true, x<10 Finally the iteration statement, each time the loop repeats, this statement is executed. Here the value of x is incremented. The semi-colon doesn't follow the for statement's parenthesis. Instead, the semi-colon follows a single looping statement, as shown here at line eight.

or a series of statements are enclosed in curly brackets. Build and run this code. The values zero through nine are output. This is actually typical for a C loop. In C programming, you start counting a zero not one. Humans start counting at one so to fix the loop for the human's eyes change the printf statement to read x + 1. This modification doesn't change the value of x only the output, save, build, and run.

Video: Repeating chunks of code with for