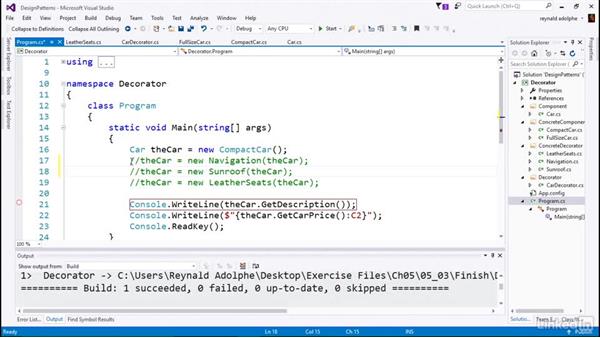 The second Decorator Pattern video concludes by covering code that build the concrete decorator (Leather Seats) and the client that execute the code. Reynald shows the variations of decorators that can be added/removed w/ the code that's commented out but also talks about the ease adding new decorators not in the code. This as a result demonstrates the Open/Closed principle.

- [Voiceover] So we looked at our component,…Concrete component, in our Decorator classes so far.…Right now let's go ahead and take a look at…our ConcreteDecorator.…So that would be under our ConcreteDecorator folder.…And we will open up LeatherSeats.…Here is the crucial logic that permits…the wrapping of Decorators.…Notice that the LeatherSeats constructor…takes in a car parameter,…it then passes it along to our Decorator.…I set the default description to Leather Seats,…and then it is used right below where…GetDescription concatenates…the description passed in with…the current description, which here is Leather Seats.…

As a result, when I run the program,…it will print a description with all the features…we added as a result.…So likewise, the price is updated in the same way…by adding the price of the leather seats,…which is $2500, to the current cost of the car.…Now let's swing on over…to our program file.…So what I'm doing here is creating…an instance of a compact car.…I could run this, and it'll just give me…