Working with scripts to improve sales 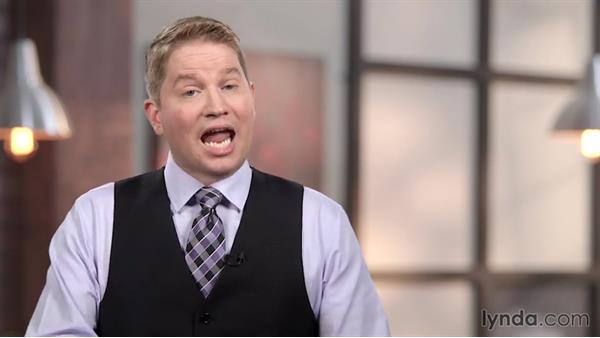 - In other videos in this small business course, I've talked about the importance of sales and how to improve your sales. In this video, I want to dive just a little deeper into a very specific part of the sales process, the conversion process. First, let's consider what the Sales Cycle is. You market to customers, that marketing creates leads, and then those leads covert into paying customers. You must learn how to improve the percentage of that conversion process.

How effective you are at taking those leads that you generate, and turning them into paying customers, will have a huge effect on your bottom line. One of the best ways to improve that percentage is through the use of scripts. A script is a way in which you say something. No, we don't want this to be mechanical or robotic. We want it to sound flexible and normal. But, by practicing a script, and turning it into a system that you use regularly, you'll be able to make lots of small improvements, that will dramatically improve your conversion percentage over time.

A first place to start with creating a script is by simply recording you talking to someone. Or, you can have an outside observer watch you do it. But the idea is that we want to listen to the process. What are the words that you say, and as best as possible, transcribe the exact words that you're saying to your customer. Then, we can go back and review those words that you used and take a look at whether or not you would make changes to that. By having it out of your mouth and putting it onto paper, it makes it much easier for you to edit and make those small tweaks.

Number two is that we can observe other salespeople in action, in particular successful salespeople. Now, maybe you have an employee who's better at conversion than you, or maybe you have a friend or a peer who will let you watch what they do. The idea is we can shadow them and write down the notes about the things that they do that's effective. We're going to imitate, in our own way, what they do and add that to our existing script. The third thing that we can do is create tools.

A tool is just a piece of paper or a document that you have with you that sort of helps you remember what your script is, what the most effective words are. For instance, I could create a tool of the five common objections of customers, and then I would create the list of the best responses to those five objections. For instance, if people normally object about the price, maybe I'll have a response about the value that our product is above and beyond our competitors.

Another example of a tool is creating a new customer sheet. This is just simply a form that you fill out while you're going through the sales process, but it gives you the questions to ask your customers. That helps you remember it, rather than having to mechanically memorize a script. Number four is the use of segments. By a segment, I mean small bits and pieces of the script that you mix and match and move around. Believe it or not, I used to play the banjo and one of the things I learned when playing the banjo is the concept of a lick.

A lick is a segment of music, a segment of finger motions that you use, and just throw in here and there from time to time. Well, you can do the same thing with your sales process. Your script doesn't have to be A and then B and then C. Maybe you have lots of small pieces and you throw in a bit of D here and a bit of F there, but by having it written down, and learning those licks or segments, you can be flexible but still use the best possible words. And lastly, after you've created the scripts, practice them as much as possible.

No, don't practice it on your customer if you can avoid it. It's better to practice on your employees, or practice with a peer, or a friend, somebody who's willing to go through this process with you. The more that you can say it, the easier it'll become and the more second nature it will be in the moment when you're working with a real customer. Scripts are a powerful tool to help you make small improvements to that conversion percentage, which in the long run, will make a big impact on your bottom line.