Understanding the role of sales in small business success 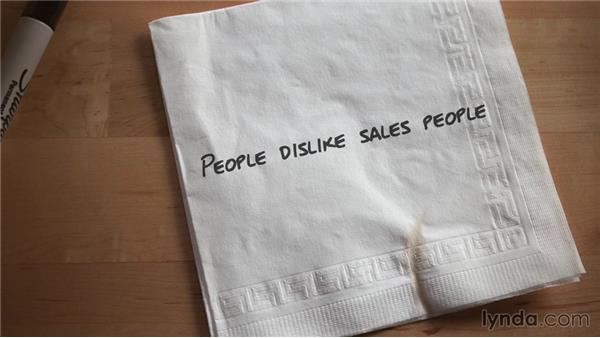 There's an old saying in business that nothing happens until someone sells something. In small business that's especially true. Sales are the engine that drive your business. And as a business owner, you're often on the front lines of making those sales. The problem is many small business owners really don't want to get involved in it. There are few common objections. The first is fear, in particular the fear of rejection.

Right? No one wants to be said no to and yet, when we're in sales, we're going to get said no to a lot. And also people just in general seem to dislike sales people. Unfortunately, there's a stereotype of what a salesperson is and hey, we don't want to be lumped in with that stereotype. And then finally, there's the lack of knowledge. Many business owners got into business with no knowledge about what a sales process is.

I want to talk about each one of these obstacles one by one and hopefully, make sales seem a little less intimidating for you. First, let's talk about the fear of rejection. What I would say to that is to keep in mind that a no equals a yes. No, that doesn't mean that you're going to be a pushy sales person and if someone says no, you just keep driving for the yes. What I mean by that is statistically speaking, there is a number of nos that you need to receive until you hear a yes.

The idea for you should be to get to no as quickly as possible. Because the more nos you get, the closer and closer you're getting to yes. Maybe you need to get ten nos for every yes. So when you hear a no, don't think of it as rejection. Think of it as checking one step off closer to a yes. The second objection is that stereotype of salespeople, we just dislike salespeople and we don't want to be like them. So what's the solution to that? Don't be like them.

And if a salesperson waits until the end to talk about money, we talk about money upfront and give people an expectation upfront about what things are going to cost. And then number three, what about a lack of knowledge? What if you have no experience in sales? I recommend that as a business owner, you make becoming a student of sales a part of your daily routine. There are great courses here on Lynda.com that teach more about sales. Also, you can buy books. You can subscribe to websites that specialize in teaching you more and more about sales.

Make it a part of your daily routine and it will be something that you are very familiar with when you go out into the field and talk to people. And one last comment about this. Keep in mind that the sales position for you, as the business owner, is temporary. Ultimately, we want to delegate this to someone else. One of the hallmarks of a successful mature medium-sized business is that the business owner is no longer the person responsible for sales. So your perspective, as a salesperson, should be to master the process.

Develop systems that you can teach to someone else. It is true that nothing happens until someone sells something. And as a business owner, you can be the person acting in a sales position to start making things happen.

Video: Understanding the role of sales in small business success