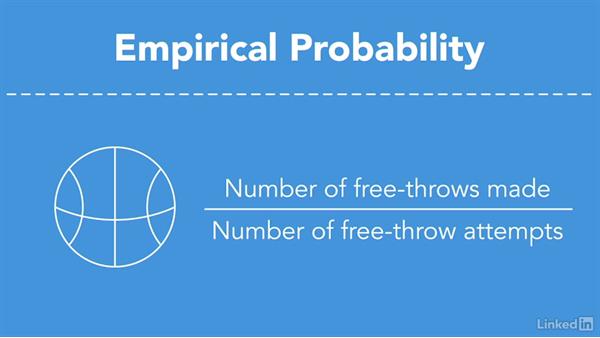 Classical, empirical, or subjective probability. How is each calculated? What does each one mean?

Assuming this is a fair coin, we have two possible outcomes, heads and tails, both equally as likely. Let's say you win the coin flip if heads is the result. What's the probability of victory? How do we calculate this probability? One outcome is a winner, and we divide it by two, the total number of outcomes. Your chance of winning is 50%. We could do this with dice also. We have a six-sided die, six possible outcomes.

Consider all the factors that go into each free throw. Player health, player fatigue, game situation, early in the game, late in the game, playoff game, home game or away game. Since every situation is different, we can only count on the observations we have made up to this point. Obviously, the more observations we have, the safer we feel about the validity of our calculated probability. Early in a season, you may want to rely on last season's free throw data.

In the playoffs, you may want to rely only on free throws made in pressure situations. Empirical probability is not perfect. But when you have some data for repeatable situations, sometimes empirical probability can give you a nice idea of what to expect. But what happens when reliable data just isn't available? How can we possibly know if the unemployment rate in the United States will drop next year? There are so many factors to consider.

And what happened last year, or 10 years ago, or even what's happened over the last 100 years, may not be a good indicator of what will happen next year. In the case of unemployment probability, people often use their opinions, their experiences, and perhaps some related data to influence their statements about probability. So yes, people sort of just guess. Some guesses might be better than others, though. An economist's opinion may be more valuable than a lawyer's opinion.