Standard deviation: Calculate it and understand it 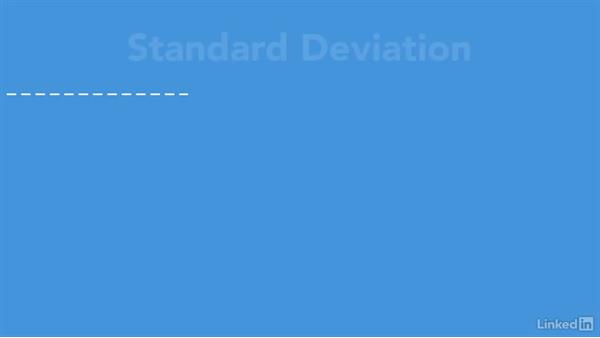 One of the most common measures of data variability. What is it? How is it calculated?

- Knowing the difference between our biggest and smallest data points, which we call our range, is often interesting, but it can be deceiving when you have even one rogue data point. So how can we get a better overall feel for the distribution of our data points? Often statisticians turn to a handy tool called the standard deviation. It's a fairly common term in the world of statistics. But still, the concept can be intimidating to many. So what exactly is the standard deviation? Well it's sort of the average distance from the mean.

Let's look at these three data sets. All are very different. Still, all three have an average of 18. The first data set's range indicates that this is clearly a data set of similar numbers, but data sets two and three have identical means and ranges. Here, standard deviation is useful. While both have large and small data points, the standard deviation of data set three tells us the numbers in data set three are more similar to each other than those in data set two.

Yeah kind of ugly, but don't worry, most calculators and spreadsheets are capable of doing all the work for you. Plug in the values of the data set and the machine does all the work. So finding a standard deviation doesn't need to be so difficult. Still for the curious, let's go ahead and show you how to use this formula. This can get ugly so let's start out with a small data set. First, we need the mean. That's easy enough. Next, we need the sample size minus one.

So now our formula looks like this. The last components of the formula are the individual data points. So for the first data point, take two minus eight. Negative six squared is 36. The sigma tells us we need to do this for every data point and then add all of those values. Next, we divide by three. This value is our variance for the data set.

Video: Standard deviation: Calculate it and understand it