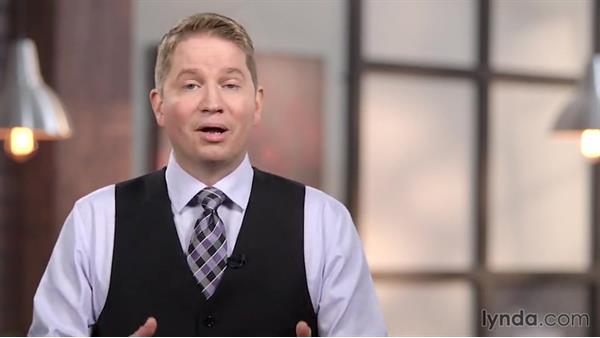 - Setting goals and achieving goals is a critical part of your success in small business, but sometimes this can be confusing for entrepreneurs. You're not quite sure where to start, or how big you should dream. It can also be discouraging because you may be setting goals repeatedly, but not accomplishing them. This is a concept that I go into deeper in my course here on Lynda on Achieving Your Goals. The idea here is I'm just going to summarize that into a bite-sized chunk for busy entrepreneurs like you.

The goal we want from this is to help you make progress over time. First step in accomplishing goals is to create a vision. This is often what people think of when they set a goal. It's the big picture. It's something that you're striving for. You're like Walt Disney dreaming about Disneyland. Every great company started with a visionary like you having a big vision for the future. Even Lynda started that way. Just for example's sake, let's say that our big goal for the next year is we want to make $100,000 dollars, a $100,000 dollars increase in sales.

Let's take that to Step Two which is where we take that vision, and we break it into targets, small bite-size pieces that are more attainable. This is very important. Many people get discouraged by big goals because they're trying to accomplish too much over time. By breaking our targets down into small pieces that we can accomplish a moment at a time, that's actually very motivational, and very exciting. Let's take that target, and we're gonna break it first in half.

That's something that we can stretch to attain. Number Three is process into actions. When I say process, I'm referring specifically to my What, When, Where Processing System. We're going to take that target, that $12,000 dollars in a month and a half, and ask ourselves the question, "What's the next step to attaining it?" Perhaps the next step is to create a marketing program, and to launch it. When are we going to do that? Well, we're going to do that in two weeks.

And, where? Well, that refers to where are the materials that we need in order to create that marketing program? What, When, Where takes a target, and now breaks it down into specific timely action. Now, Step Four, public. We want to make this commitment as public as we're comfortable making it. We want to tell employees. We want to tell friends. We want to tell family. The reason behind this is just psychologically speaking, when you make a commitment public, you are more likely to follow through on it.

By taking a big vision, and breaking it down into small chunks, you can progress along the path to entrepreneurship, and feel great about what you're accomplishing.