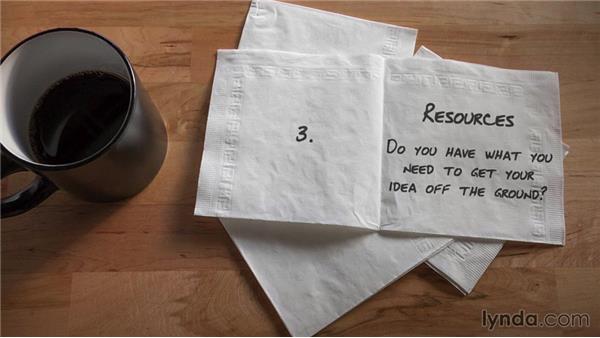 Occasionally, as a small business author and business coach, people approach me with ideas that they have. They just want to bounce the ideas off me. For instance, in 1999, someone told me about this great idea they had for online movies and TV, taking it all and putting it online so that we could watch it. Someone else came to me and approached me with the idea for a teddy beer. The idea is that it's a teddy bear that holds beer. Well, what do these ideas have in common? It's that they may have been great ideas, but they weren't necessarily opportunities.

Just because you have an idea for a business, doesn't necessarily mean that you can follow through with that idea and make money on it. So let's talk about six things that you can analyze yourself to determine whether or not your business idea is also an opportunity. Number one is we want to take a look at Demand. How many people want this thing that you're creating? Are there enough people out there to create a viable market? We may not know the answer to that, so the idea is to go to individuals who fit that market and ask them, would you like this thing if we offered it to you? How much would you be willing to pay for it? Just a little bit of researching to demand will open your eyes toward the direction of whether or not you have an opportunity.

Second is Expertise. Remember that example that I gave you of the online web video company. Well, the problem was the individual who shared it with me had no experience, no expertise whatsoever in online streaming or websites. You need to have experience and expertise in the area in which you're thinking about creating a business. Either that, or you need to recruit people who do have that experience and can help you make it become a reality.

Number three is consider the Resources that you have available. Do you have the money that you need to get something like this off the ground? Do you have materials and parts and access to people who can help you make this a reality? If you don't, that's a significant hinderance toward creating an opportunity. Number four is, is there Profit to be made? Sometimes, you may have a great idea for a product that people want but they're not willing to pay for it at a level that is going to be profitable.

You may have to find ways to reduce manufacturing costs. Either by outsourcing or putting things overseas or finding other scales of economy that allow you to lower the cost of production. Otherwise, there really isn't much of an opportunity here. Number five is Distribution. If we have this great idea, like a teddy beer, how are we going to get it out into the hands of potential customers? That all depends on distribution channels.

How are we going to get this into the store? Do you know how to do that? And if you don't know how to do that, you'll need to do some research and start making connections to make that a reality. And then, number six is, do you have a Proprietary Advantage? What that means is, is there some knowledge that you have that makes you have a head start in any potential competitors. Do you have a patent? Do you have a trademark? Is there something that gives you control over this idea? Keep in mind that if you do have a great idea and you start to create it, there's no reason why another company, a bigger company with more resources than you won't start doing it.

Unless you have some proprietary advantage. Now, one last comment. Sometimes this isn't so much about whether or not it's an idea, versus an opportunity, as it is whether it is an opportunity versus a best opportunity. There are lots of different things that you can do as an entrepreneur. The idea is, which one of those many opportunities is the best one for you, and the more you can focus on your best opportunity, the more likely you will have great success.