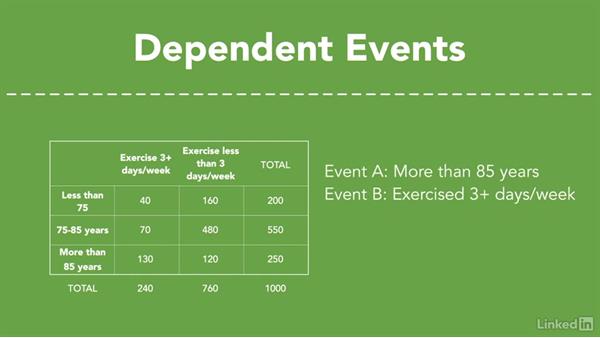 The probability of rain was 30%. So, 50% times 30% gives us 15%. Since they are equal, these events are independent, but we sort of knew that going in. So, let's use a more realistic example. For this example we will use this data set. And again, let's consider two events. Event a, a person lives past 85 years of age. Event b, the person exercised three or more days per week.

25% times 24% gives us only 6%. This means that we should expect 6% of those that live past 85 to exercise three or more days per week, but we came up with 13%. From the data it appears that these two events are dependent. In other words, the data from this group tells us that the more you exercise, the longer you are likely to live. On the other hand, in the previous example, it didn't matter if we flipped heads or tails.

The probability that it could rain did not go up or down. Next time someone tries to tell you that two events are related, test the data using the information we just discussed and see if those events are dependent or independent.