Probability of two events: Either event? Both events? 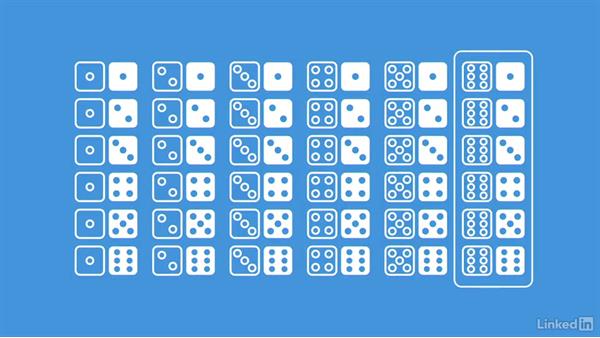 How to find the probability of two events that might or might not intersect. When to add and subtract probabilities.

We can see here that two different events will win this contest for you. Event one, heads of flip one, two out of the four scenarios provide that result. Event two, heads on flip two, same here, two out of the four scenarios provide that result, but we also see that there is an overlap here. We wanna be sure not to double-count that outcome. So to calculate the probability of getting heads on at least one of the two coin flips we add the probability of event one plus the probability of even two, but we subtract the overlap, which is when both event one and event two occur.

We can see that our probability of getting heads on at least one of two coin flips is 75%. This is what is called the addition rule. Let's up the difficulty level just a tiny bit. Let's do this with a pair of six-sided dice. You win if you roll either a six with roll one or roll two. Here are all the 36 possible outcomes. There are six outcomes where we roll six on the first die.

There are six outcomes where we roll six on the second die, but one of those outcomes overlaps. So to calculate the total probability we add 6/36ths plus 6/36ths and subtract the overlap, 1/36ths, thus the probability is 11/36ths or 30.56%. Sometimes there are no overlapping scenarios, for example, what are the odds that the sum of two rolled dice will sum to either seven or 11? Here are the scenarios where the dice add up to seven, here are the two scenarios where the dice add up to 11, notice there is no overlap.

Video: Probability of two events: Either event? Both events?