Permutations: The order of things 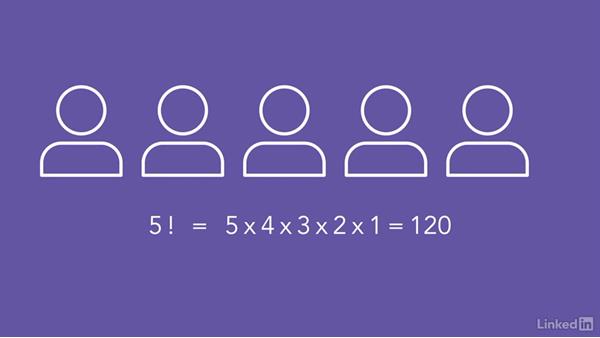 How many different ways can objects be organized? Describe and calculate permutations.

- At this point, we understand that probability, in its most basic form, is a ratio, typically, something like this. The desired event divided by all the possible outcomes. For many of the examples we've used, you've been given both the desired event and the outcomes, so all you need to do is calculate the answer. When you're out there alone in the big world of probabilities, sometimes it isn't that easy to figure out what all the possible outcomes are. That's why it might be helpful to understand permutations.

They will be judged first through fifth. What are all the different ways these five people might end up ranked? In other words, how many permutations are there of these five contestants? Rather than trying to create an exhaustive list, we can use this simple formula, n!, which we call n factorial. What does that mean? It simply means that if we have five objects, in order to see how many permutations we have, we calculate five factorial, which simply means we multiply five times four, times three, times two, times one.

Yep. Believe it or not, there are 120 different ways in which these contestants can finish this contest. How about if we add six contestants? Six factorial, six times five, times four, times three, times two, times one. 720 different permutations. Let's take a different example. Let's say there's a race with eight runners. Prizes will be awarded to only the top three finishers. How many permutations are there for the top three spots when you have eight contestants? Here, we use a different formula, n factorial divided by the quantity and minus x factorial where n is the total number of objects.

It's not nearly as ugly as it would seem because the five, four, three, two, and one cancel out on both top and bottom. So we end up with eight times seven, times six. 336 different permutations for those top three spots when we have eight runners. As you consider things like general probability, rankings, seat arrangements, or scheduling, or as you ponder just how many possible outcomes there might be for a certain situation, consider utilizing the basic permutation calculations to better understand a situation.

Video: Permutations: The order of things