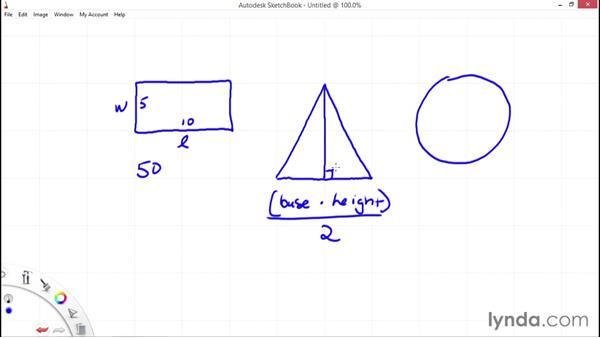 - All right, in this video, I'm going to talk about a couple of different concepts, perimeter and area. So, perimeter, is the measure of the distance surrounding something flat, like a picture frame, maybe, or a fenced in yard. So, if you see this, imagine this is a picture frame, let's say. We're going to get the perimeter by adding up all the distances surrounding the thing. So we often call these length and width. So, usually the shorter distance is the width, so I'll put a w there, and the longer distance is the length, so I would add up the two lengths, and the two widths.

So the formula for that is two pi r. So, pi is actually a number, this little symbol right here, and the number is approximately 3.14. So, the r in the formula stands for the radius of the circle. So I'll explain what that is. If we draw a line straight across the circle, that's what we call the circle's diameter, so that's the distance all the way across the circle.

The radius is one half of the diameter, and we usually call the radius r. So let's say we have a circle here, and we know the radius is four. We would just put it into our formula, to solve for its circumference or its perimeter. So we would say two times pi, and I'll just write out pi. If you have a calculator, you may have a button for pi, for now I'll just write it out, times the radius. If we put that in our calculator, that will give us the perimeter of the circle, AKA its circumference.

So I'll clear the screen so I can talk about the next concept, which is area. So, area is the measure of space within something flat, again, a yard or maybe a circular skating rink perhaps. So there's a few different ways we need to calculate area depending on what kind of shape we have. Go back to our rectangle, or a rectangle. The area is the width times the length. So let's say, again, we had the width of five, and let's say the length is 10.

We would just multiply those two numbers to get the area, so area of a rectangle is length times width, so five times 10 in this case, would be 50. The area of a triangle is what we call the base times the height, divided by two, so for the area of a triangle, we need to calculate what the height is, and to do that, we need to draw a line that's perpendicular to the base, and perpendicular means at a right angle, to the base.

So let's say the base of this triangle, and I'll call it this side, was 10. And let's say the height is 12. So we would multiply the base times the height, 12 times 10 is 120. And divide it by two to get the area, which is 60. For the area of the circle, we're going to use that number pi again. There's a formula for this. So the area of a circle is pi times the radius squared.

So let's say, again, we have a circle with a radius of five. We would square that radius so five to the second power is 25, we'd write that as 25 times pi. A lot of times in math, we leave pi as pi, and we don't turn it into that 3.14, even though it is that number. So, one more thing I want you to notice about all these areas, they're expressed in square units, so going back to this picture frame, let's say that this was 10 inches by five inches.

We would express the area as 50 square inches, and that's just how we express area, in terms of square units, and the exact same thing for the circle. It would be 25 pi square inches. So I'll clear my screen, give you another example of when we can use area. So in real life, let's say you're ordering a pizza. And you want to figure out, what really, is the difference between maybe a medium and a large pizza in terms of its size, and we can express its size in terms of its area.

So let's say we have a couple of different options. Let's say we have a 10 inch pizza, versus a 12 inch pizza. So let's think about these pizzas for a second. The 10 inch pizza, that means it has a diameter of 10 inches. So we just learned that the radius is half the diameter, so the radius of this pizza, would be five, and the bigger pizza has a diameter of 12 inches, that would mean its radius is half of that, so its radius would be 6.

So, doesn't seem like a big difference, maybe, at first, but let's look at the pizzas' areas if we calculate them. So remember, the area of a circle, is pi times the radius squared. So for the smaller pizza, we would have five squared is 25 times pi, and for the larger pizza, we would have six squared, which is 36 times pi. So I'm going to just approximate a little bit here, using three for pi, this would turn into about, a little bit more than 75 square inches.

And using, again, three for pi, this would turn into 108 square inches. So, the pizza on the left is actually, not even three quarters of the pizza on the right, so just a way to kind of get a sense of how big shapes are by calculating their areas. So, remember, you can solve for perimeter by finding the distance measured around something. Solve for the area by remembering the formula for the shape, and solving for the distance inside something.

Now, open up the Exercise Files for Chapter three, go to the file for perimeter and area, and try some problems on your own.

2/10/2015
This course explains essential math concepts in clear language, using real-world problems that will help learners of all levels feel more confident with math. Learn how to calculate percentages for tips and taxes, compare prices as you shop, find the area and volume for home-improvement projects, and even calculate calories. The sections are organized into three foundational areas and four real-life areas. Author Vince Kotchian even points you where to go on your next step to math proficiency. Start now and learn the basic math skills that make everyday life a little easier.
Topics include: