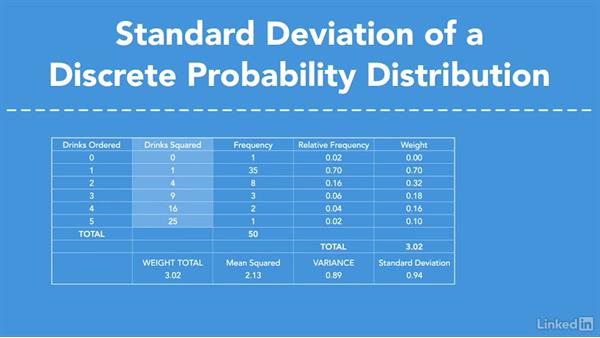 How are these statistics the same/different from what was already covered? How are they calculated?

Now that we know how many of the 50 customers ordered each of those discrete drink totals, we can find the relative frequencies. 0.02 or 2% of customers ordered zero drinks. 0.70 or 70% ordered a single drink and so on. So, what was the mean, the average number of drinks ordered per customer during this single hour? For this we will be calculating a weighted mean, in other words, I will multiply zero drinks times the relative frequency 0.02.

I will multiply one drink by 0.70. I will multiply two drinks by the relative frequency of 0.16. I will then add up all of these products and this tells me that my mean for this probability distribution is 1.46 drinks. Our average customer between 8am and 9am ordered 1.46 drinks. Next, let's figure out the standard deviation for this probability distribution.

This would include 98% of our customers. And you might remember that three standard deviations should capture 99.7% of our data points. So, according to our calculations, that single order of five drinks was a true outlier. And just like that, you're becoming a real statistician.