How many standard deviations? 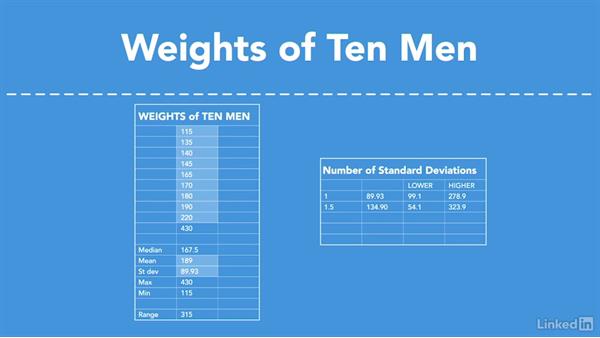 Just how far is a data point from the mean? Standard deviations help us figure this out.

And yes, we now have gotten below zero on the low end, about negative 36 pounds. Only when we get to three standard deviations does the last data point fall within our limits. I guess the next question is, what does this mean? Is any of this significant? Well, for data that would be considered symmetrical, which means that we have a nice bell-like distribution centered at the mean, it is estimated that about 68% of your data points should fall within one standard deviation of the mean.

More importantly, standard deviation will help us generate interesting questions about the data collection methods, the entire pool of data, and even the individual data points.

Video: How many standard deviations?