Finding the right tasks to outsource 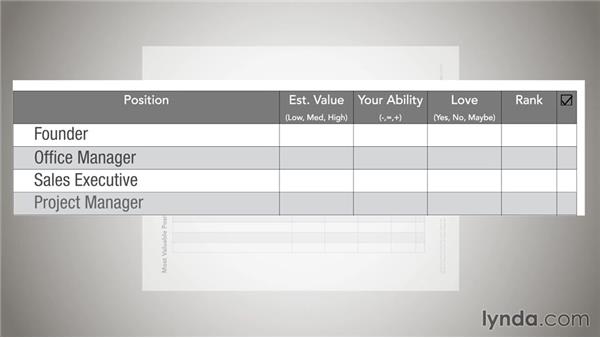 Join Dave Crenshaw for an in-depth discussion in this video Finding the right tasks to outsource, part of Small Business Secrets.

It's easy in a small business to find yourself becoming the jack of all trades. You're not just having one position in your business, right? You may have ten or 20. You're the sales executive, you're the manager, you're the janitor, the list just goes on and on. The problem with this, is that it devalues your business by building something called Blue Sky. Blue Sky is a financial term that represents everything in the business that's attributable just to you as the business owner.

In other words, if you sell the business to someone else, it's just blue sky, it just disappears. Instead what we need to do is build value in your business by delegating to other people and the first step to doing that is identifying your MVP's, or your most valuable positions. These are the top two things that you do that are worth the most to the bottom line of the business, everything else should be delegated. Now I've given you a worksheet that you can use to help you identify those most valuable positions.

On the first page, you'll see a list of positions that the jack of all trades business owner fills. All you need to do on this page is go through and check off on the left hand side every position that you believe that you're filling in your business. On the second page is where you'll list all of those positions. Simply copy over the titles of the positions into each row. Then, on the next column, you're going to put in the estimated value for each position.

I've made this a little easier for you because on the first page we've already estimated some values. Just put your best guess as to what those values are. In the next column you're going to simply rate your ability in those things. Now, even though you can do lots of things well as a business owner, some things you do better than others. So, give it a minus if your performance is below the average person, equal if it's equal to the average person and plus if well, you perform it really well.

In the next column deals with love and what that means is, do you love doing that thing? This is a simple yes, no, or maybe question, rate how well you love each of those positions. And then, finally, by looking at the estimated value, and your ability and how well you love these things, rank each item on the list, starting with number one being the top of the list. Number one and number two are your most valuable positions.

These are the two things that ultimately you want to be spending the majority of your time doing as a business owner, and everything else on this list? Well, they're your LVP's and ultimately what you want to do is deligate these least valuable positions to someone else. The goal here is that by focusing more and more of your time into your most valuable positions, you'll be decreasing blue sky, which ultimately will increase the value of your business.